Neuron name patent has triggered a series of speculations across the internet which hint that Bajaj Auto is the latest to group up against Royal Enfield.
By : Prashant Singh
| Updated on: 03 Oct 2020, 20:22 PM

Bajaj Auto might be cooking something which goes by the name 'Neuron', recent patent suggests. The new name registration has triggered a series of speculations across the internet which hint that Bajaj Auto is the latest to group up against Royal Enfield.

Currently the only cruiser in the company's lineup is the Avenger family which isn't considered a direct rival to the bikes from Royal Enfield. But since the neo-retro segment is picking up in India and how, it won't be a surprise if the latest rumours actually turn true. 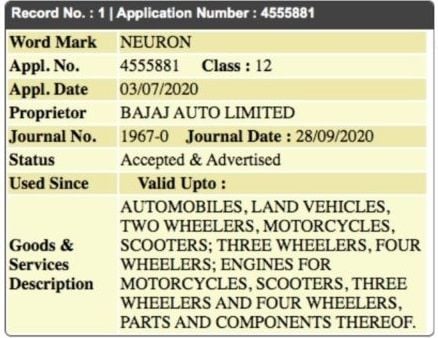 Only recently Honda Motorcycle and Scooter India (HMSI) stepped up the game with the reveal of H'Ness CB350 and announced that it will be placed in the direct territory of Royal Enfield bikes. The company said that it will be priced approximately at around ₹1.90 lakh.

Bajaj Auto already has the technology and powertrain, all it needs is a definitive approach for the segment which is relatively new to the brand. The new product in the making definitely won't share the nameplate with the Bajaj Avenger's family, the patent has made this much obvious.

For now there are only speculations and no concrete details of what ingredients Bajaj Auto is using in the making of its new bike. Only next few months and chances are that the bike may appear rolling away under camouflage, but that's again a speculation!