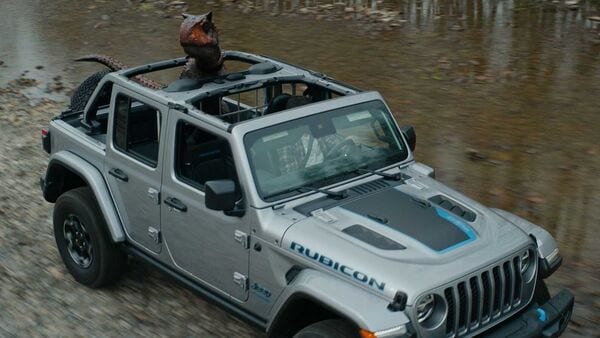 Jeep SUVs are expected to be featured in the new Jurassic World film.

Jeep has launched a global marketing campaign in association with the Jurassic World film franchise, and in its latest TV commercial, a pet dinosaur is shown taking a ride in a Jeep Wrangler 4Xe. The idea is scary, but unique for sure. The one-minute video features the owner of the Jeep Wrangler 4Xe adopting an orphaned baby dinosaur as his pet. The video gives us a glimpse of a Jeep Grand Cherokee as well. The TVC also shows how the dinosaur sleeps in the SUV. It looks downright adorable until, in the end, the mummy dinosaur shows up and ruins everything.

Automakers often take unique marketing strategies to reveal their products. Jeep seems to be relying on the latest movie of the Jurassic World franchise to showcase its Wrangler 4Xe. The iconic SUV manufacturer under the Stellantis umbrella's association with Jurassic World is nothing new. To be precise, Jeep Wrangler's relationship with dinosaurs goes way back to 1993.

We all probably remember the first Jurassic Park movie and how it featured 1992 Jeep Wrangler. It even outran a chasing T-rex if you remember the scene. In the Jurassic World too Jeep Wrangler was featured. In interaction with Motor1, Jeep CEO Christian Meunier said the company is very keen to offer special edition Jeeps to the movie. While he didn't confirm anything, his comment indicates that Jeep wants to take the association between the brand and the Jurassic World film franchise to the next level.

Meunier reportedly said that the Jeep brand has substantially expanded in the three decades since the first appearance of the Wrangler in the original Jurassic Park film. "We have entered into new SUV segments, we have increased our global production footprint and, with the rollout of our 4xe electrified portfolio that includes the Wrangler 4xe, the Jeep brand is developing the most capable and sustainable 4x4 vehicles in the world, satisfying the needs of our expanding global Jeep community," he further added.