Jeep Meridian may look sophisticated and may have a feature-rich cabin but give it a trail and the SUV sheds all perceived inhibitions to play dirty. Read our first-drive review to know more.
By : Shubhodeep Chakravarty
| Updated on: 19 May 2022, 18:51 PM

Jeep Meridian first-drive review: Stairway to the top? Jeep is looking at having a dominant say in the large SUV segment but the nature of the challenge to be mounted has to be enormous.

The large three-row SUV space in the country has long been dominated by Toyota Fortuner and even though rivals have come and gone, the crown hasn't budged an inch. But there is a new challenger that's all set to hit the Indian market, one that is making a brazen claim of marrying sophistication with trademark ruggedness. The Jeep Meridian has been tailor-made to appeal to Indian aesthetics of being a large SUV with a solid road presence. The ‘Jeep’ brand means that the Meridian also claims to have some very serious 4x4 credentials while still bringing the promise of a reliable daily commute option within city limits. 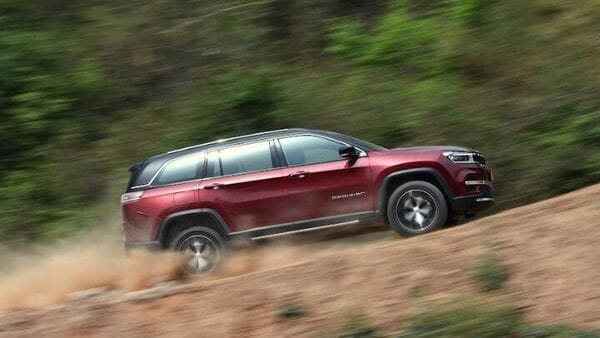 The Jeep Meridian will be locally manucatured at the company plant in Ranjangaon.

It has been a long time coming for the Jeep Meridian but the three-row sibling of the Compass has its priorities highlighted for the spotlight to come firmly on it from all sides. The list of these priorities is mainly based on four fundamental pillars, pillars crucial to determine the fate of any large SUV here - looks, space, features and capability. And it is on these key pillars that we drove out the Jeep Meridian in the scenic city of Chandigarh, and beyond, recently.

Here's the first-drive review of the all-new Jeep Meridian SUV:

The Jeep Meridian is designed far more to impress than to intimidate. And that can be quite refreshing. The SUV ditches butch visual traits which are common to several large SUVs and instead, has geometric lines meeting at each of the corners.

Of course, a Jeep isn't a Jeep without the trademark seven-slate front grille but flanking this on either side on the Meridian are crisp LED head light units and LED DRLs. The full-width chrome bar bisects the front bumper and there is a large air dam to embolden the face. The bonnet itself is perched confidently above but isn't intrusive to the line of vision. 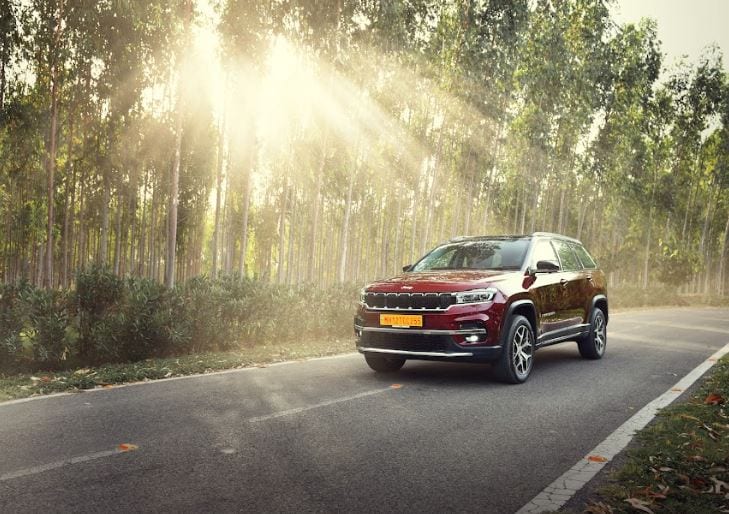 Jeep Meridian has a solid road presence without ever trying hard to look large.

Over at the side, the Meridian stands on 18-inch wheels with a very smart alloy design. The square-ish wheel arches are mammoth but that was expected because this vehicle also needs to go beyond conventional roads. There is a character line that stretches all the way from the front wheel arch to the rear door handle while the black skid line below is done well as well. 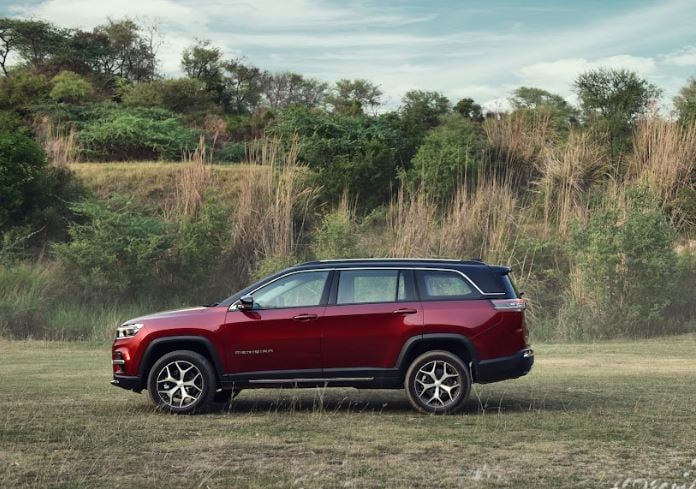 The Meridian has large windows, including the rear quarter glass, and makes do with subtle chrome additions to enhance its visual appeal.

The rear profile of the vehicle benefits enormously from an uncluttered trait with sleek LED tail light units, a chrome connector in the middle, a grey rear bumper garnish and a brake warning light mounted high helping the SUV stand out. 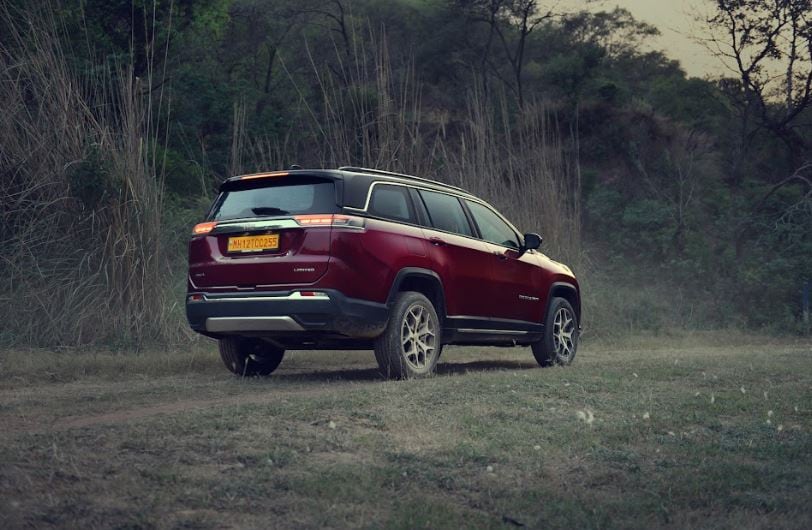 A look at the rear profile of the Jeep Meridian.

The most crucial aspect of a vehicle in this segment, perhaps, is the space on offer on the inside. The Meridian is the first Jeep in India with three-row seating but space and comfort is a bit of a hit and miss here. The third row is obviously the prime focus but unfortunately, there is very, very limited space on offer here. While getting in and out is reasonably easy courtesy the large door opening angle and the one-touch tumble and fold functionality on the second-row seats, this is where the convenience ends. Once the second-row seats are locked back in place, there's no escaping. The seats are positioned high up so the derrière is nearly at the same level as that of the folded legs. The seat cushioning itself is also quite limited, leaving only the recline as the positive takeaway from here. 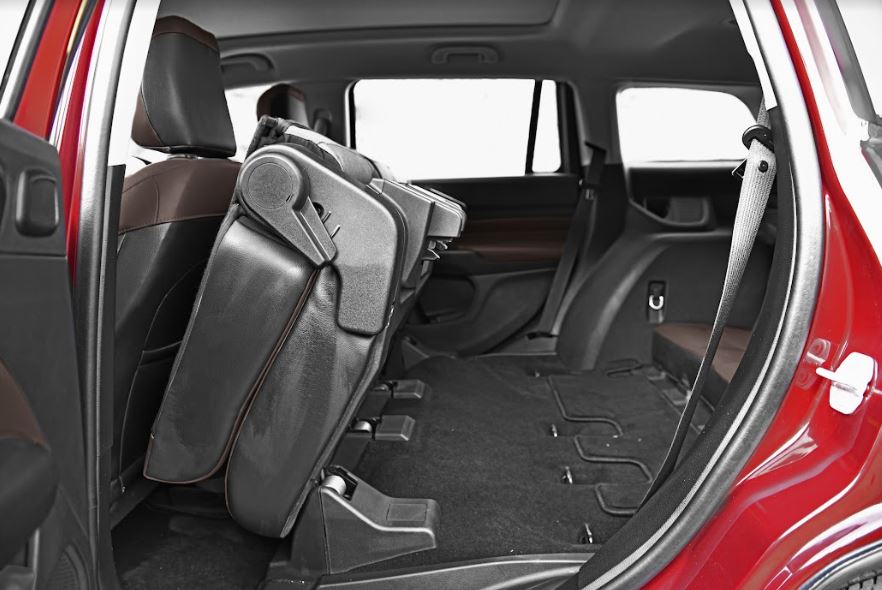 While getting in and out of the last row in the Jeep Meridian is easy, staying put there is a task.

But on expected lines, the cabin of the Meridian reclaims itself once you scoot forward to the second row. Well-cushioned seats with premium upholstery, large windows, plenty of under-thigh support, leg room and knee room - all pamper occupants. The one shortcoming though is that the air vents are placed on the rear of the center console and the cooling isn't as quick or effective as it could have been had these been mounted on the roof. This aside, the second-row of the Meridian passes with flying colours. 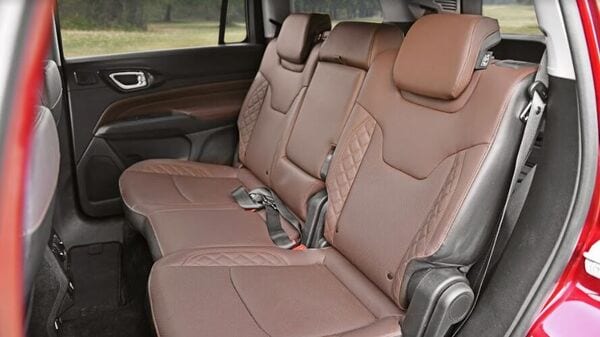 A look at the second-row seats inside the Jeep Meridian.

The best part about the cabin though is reserved for the front where a 10.1-inch main infotainment screen is smartly placed on an even smarter dashboard layout. The high-resolution display is a treat for the eyes and is responsive to touch. Although navigating through the menus may have a learning curve, the display and what it brings to the fore is on par with what one would expect from a premium SUV like Meridian. 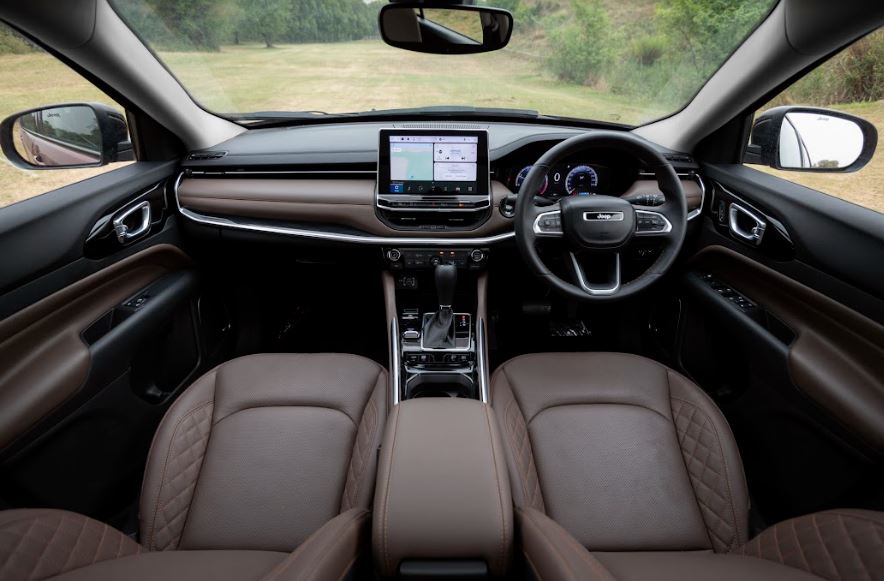 The dashboard layout and the seats inside the Jeep Meridian is both aesthetic and comfortable, respectively.

It isn't just the main display unit that is par for the course but the rather extensive feature list of the Meridian as well. 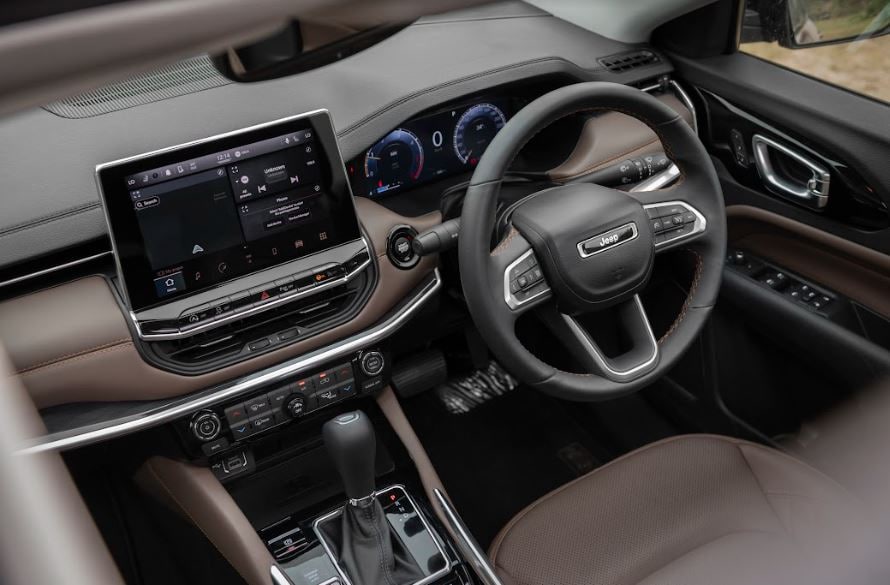 A closer look at the main infotainment screen and driver display screen inside the Meridian SUV.

The usual fare of wireless phone charging station, support for wireless Apple CarPlay and Android Auto, and 360-degree camera work flawlessly. The multi-zone climate control is a bit of a hit and miss, as mentioned above, but the large sunroof above and plenty of storage spaces all around sure would make long trips a comfortable experience. 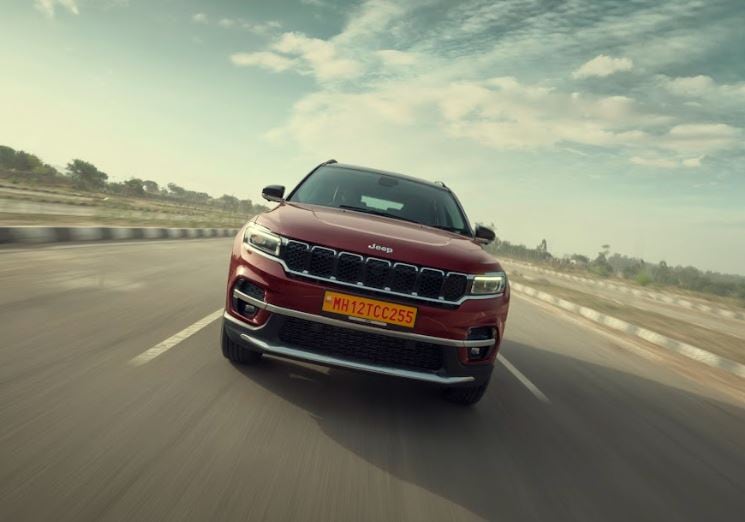 The Jeep Meridian is as confident on tarmac as it is well-poised on trails.

Yes, the Meridian is tailor-made for long journeys even if it may also do its duties as a city warrior with finesse. Powered by a 2-litre multi-jet diesel engine which produces 170 hp and has 350 Nm of torque, the Meridian is a refined SUV with an elegance on road that is distinct from its rugged nature off it. Very deceptive, in a good way of course. And while one can choose a six-speed manual transmission unit, we strongly recommend the nine-speed AT for its sheer ability to knock off the numbers without batting an eyelid. The gearbox is quite responsive to throttle inputs and while it helps the SUV keep a solid pace within city limits, it has absolutely no hesitation in pushing its way to three-figure speed marks.

This is especially good because the Meridian has no dedicated drive modes and instead, makes do with terrain-select modes only. 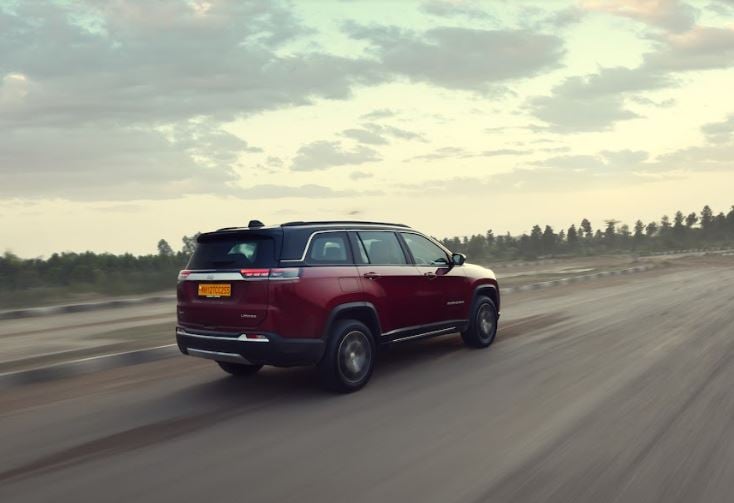 Jeep Meridian has great straight-line stability but even on corners, and for an SUV of its dimensions, it moves in with a sense of purpose.

But put all of these on one side of the pedestal and just give the crown to the independent suspension set up on the Meridian. The tireless workhorse on the vehicle, the suspension system is one of the best that you can get in this segment and automatically elevates the Meridian over the rather brute and jumpy Fortuner. This Jeep manages to make mincemeat of broken roads, sails over speed breakers at almost all speeds and when it comes to challenging the wilderness, helps the Meridian push forward with a charismatic air of disdain all around it. 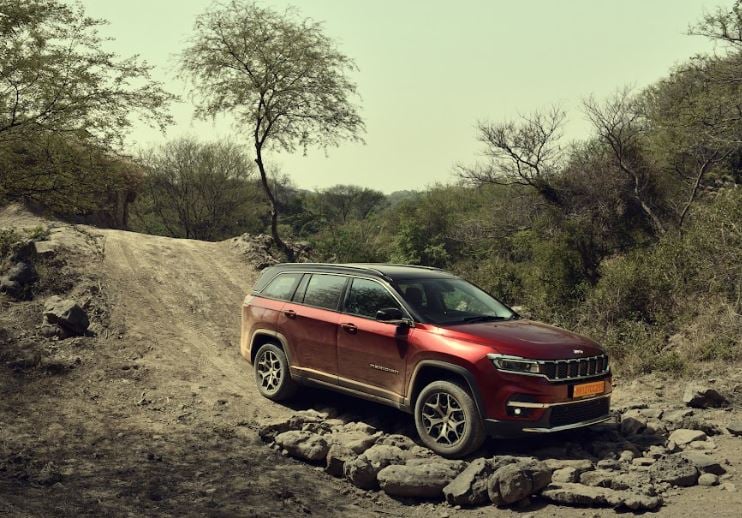 The Meridian tackling the trails.

True, a Jeep is at home where there is no home, and out beyond the tarmac, the Meridian creates its very own sanctuary. Don't be fooled by its elegant visual appeal, the Meridian can be a bad boy in the outbacks. Through our extensive test drive on an off-road circuit near Chandigarh, the Meridian came out shining and shining bright through every obstacle. An approach angle of 21.5 degrees helps it dive into whatever may be ahead and the AWD system keeps traction going at all times. Even when wading through water, the Meridian managed to not just push its way forward but did so with perfect ease and without ever making the occupants feel nervy. Jeep Meridian gets a move on regardless of the size and scale of obstacles.

While only a microscopic few buyers really push their vehicles to off-road limits but the fact that Meridian stays true to its family name and hits the trails with enormous capability is a massive chin up for the model. 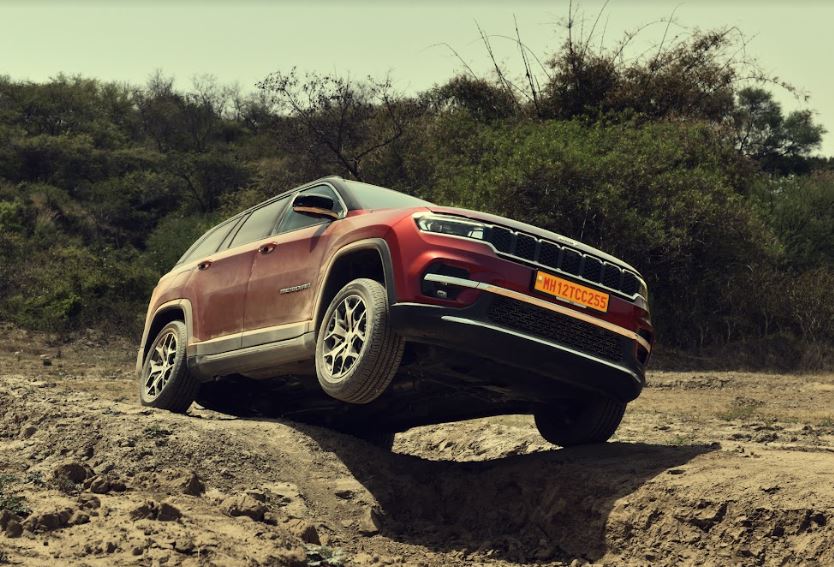 Jeep Meridian is a capable ntrant in the large SUV segment and gets most of its fundamentals right. Most, not all.

The success of the Compass means Jeep India was always ready and raring to explore the premium SUV segment with three rows of seating. And because there are only a handful of players in this segment, there is potential to make in roads and gain ground.

The Meridian then comes as a premium offering with a solid alliance between everyday drive comfort and some very impressive off-road capabilities. Bookings for the latest Jeep SUV are open and deliveries are likely to start from third week of June. We expect Jeep to price the Meridian at upwards of ₹35 lakh and if you can ignore the constraints of that last row, it could be a great option to consider. Is the Fortuner then under threat? Well, every champion does deserve a champion challenger and that is what the Meridian may well be.

Noida Police to use electric vehicles for patrolling, other duties