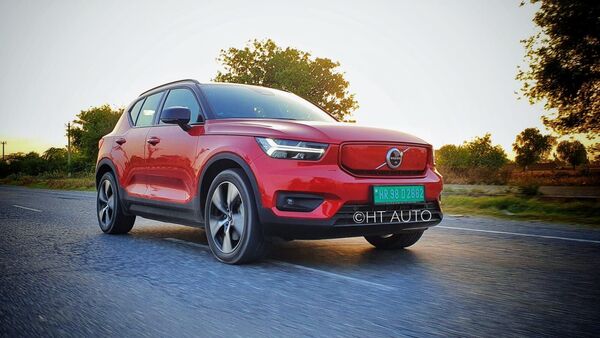 Volvo XC40 Recharge electric SUV will be launched in India on Jul 26.

Along with the launch, Volvo is also expected to open the bookings for the XC40 Recharge SUV. Expect the deliveries to start closer to the festive season this year. Volvo XC40 Recharge SUV will rival the likes of Kia EV6 among other premium electric cars in the market.

As far as the design is concerned, there is not much difference between the XC40 standard model and the electric iteration. The only visible changes are the grille, which comes covered, missing exhaust pipes, different set of alloy wheels and the XC40 Recharge badging.

On the inside, the Volvo XC40 Recharge offers a 12.3-inch driver's fully digital screen and a new 9.0-inch vertical touchscreen infotainment system that has been developed in coordination with Google. There are other features like wireless charging, panoramic sunroof, automatic climate control, 360-degree camera and more. The XC40 Recharge SUV in India will be offered with 100% leather-free upholstery.

Expect the Volvo XC40 Recharge SUV to be priced in the range between ₹60 lakh and ₹70 lakh (ex-showroom). This will pitch it up against Kia EV6, also priced similarly. Hyundai Ioniq 5, which is expected to launch later this year, will also be one of the rivals for XC40 Recharge.