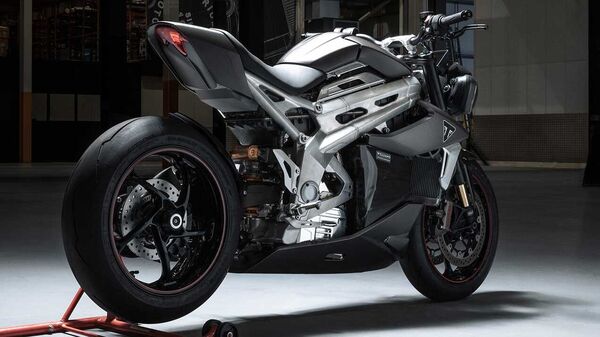 Triumph TE-1 is the first-ever electric motorcycle from the brand.

British premium bike manufacturer Triumph Motorcycles has unveiled details of its first-ever all-electric model TE-1. The Triumph TE-1 comes promising a 160 km range. Also, the motorcycle promises an acceleration capability of 0-100 kmph in 3.6 seconds. The all-electric motorcycle is claimed to produce 175 bhp of peak power. The motorcycle brand claims that the TE-1 prototype exceeded expectations and achieved some incredible outcomes.

The electric motorcycle is claimed to come as 25 per cent lighter than comparable models, which include Zero SR/F streetfighter and Harley-Davidson's LiveWire One.

Speaking about the range of the Triumph TE-1 electric motorcycle, despite the company mentioning a 160 km range, it is not revealed what would be the ranges on highway and city riding conditions. The motorcycle will come with a DC fast charging technology that is claimed to allow the EV to be charged 0-80 per cent in 20 minutes. Also, the regenerative braking technology will help charge the battery while decelerating. The company aims to further optimise the motorcycle for better performance.

As Triumph claims the TE-1 electric motorcycle will arrive as a lightweight machine, expect it to be weighing around 220 kg. This makes it 30 kg lighter compared to the Harley-Davidson LiveWire One, which weighs 250 kg.

Speaking about the electric motorcycle, Andrew Cross, Helix Chief Technology Manager, said that it is delightful to see the final TE-1 motorcycle testing phase completed and further validation of the performance and efficiency of the Scalable Integrated Modular Inverter.

Triumph is not the only legacy two-wheeler manufacturer working on an electric motorcycle. While Harley has already revealed its LiveWire One, Ducati has made impressive progress on a racing electric motorcycle for the FIM MotoE. It also announced that there will be a mass-market-focused electric sports bike. However, Ducati has not given any specific timeline for the project.