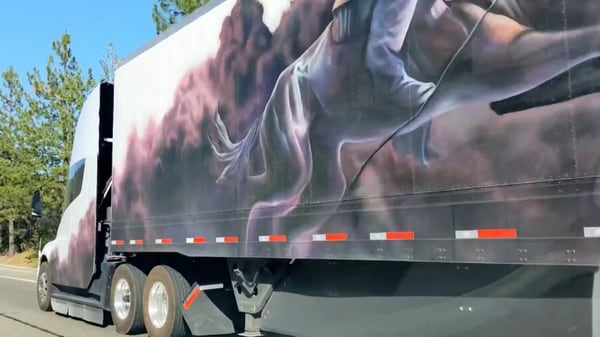 A Tesla Semi electric pick up truck was spotted on a highway with a splendid artwork on its body, Electrek reported. The tech giant seems to be putting the pickup truck to work in its own operations. While the Tesla Semi was first unveiled in 2017, the automaker's electric pick up truck's mass production has been pushed to 2023. The design of the electric tractor and trailer feature some beautiful artwork, indicating that it is the same unit that Tesla brought to its Cyber Rodeo earlier this year.

The Tesla Semi pickup truck was spotted westbound on the 80 near Colfax, California and it suggests that the EV maker is putting the truck to work moving cargo between its many locations in Northern California and Gigafactory Nevada outside of Reno.

The spotting of the truck also brings us back to reports of Tesla saying that it would be its own first customer when it comes to the Tesla Semi. The automaker operates a large fleet of trucks in its own operations and also uses trucking companies and integrates electric trucks in its fleet. Thus, Semi pickups would align with its mission while also reducing its cost of operations.

Tesla Semi electric truck claims to be capable of running 805 kilometres or 500 miles on a single charge and will be able to tow 80,000 lbs. The truck could even come with a higher payload capacity as compared to its diesel-powered counterparts. It also claimed that the electric truck will not break down in its first million miles of running. Tesla Semi is also claimed to offer an efficiency of more than 0.80 km per kWh, through its aerodynamics and powerful electric powertrain.