Ola Electric, Pure EV, Okinawa among others under scanner for EV fire incidents

Union Minister Nitin Gadkari had said that notices have been sent to around five electric two-wheeler manufacturers for EV fire incidents earlier this year after a probe by an agency appointed by the Centre.
By : HT Auto Desk
| Updated on: 27 Jul 2022, 08:54 AM 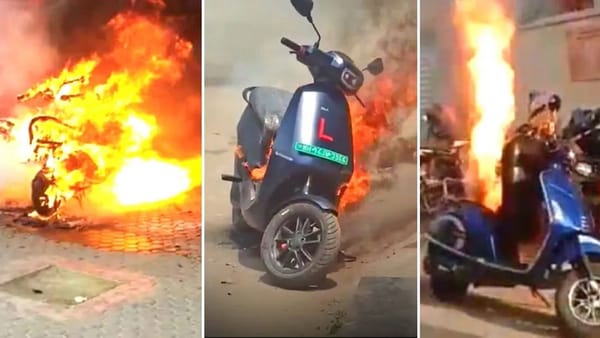 Ola Electric, Okinawa Autotech and Pure EV are among electric two-wheeler manufacturers who have been sent notices to reply to fire incidents involving their models in recent past.

Ola Electric, Okinawa Autotech and Pure EV are among some of the electric two-wheeler manufacturers who have been sent notices after their models caught fire on several instances in recent past, according to report by Mint. The EV fire incidents, which raised questions over the safety of electric vehicles, especially two-wheelers, were investigated by an agency appointed by the Centre to find the cause and those accountable for such safety lapses. While only once incident of Ola Electric scooter catching fire was reported widely, Okinawa and Pure EV saw several such incidents earlier this year, which also turned out to be fatal for a few people.

Nidhi Khare, chief commissioner of the investigating agency Central Consumer Protection Authority (CCPA), said that fatalities in such incidents raises question whether the electric vehicles sold in the market met the test standards. The agency has taken suo moto cognizance of safety-related concerns in EVs sold currently. Khare said, “We sent notice to the companies and asked them why these incidents happened and why we should not take action against them under unfair trade practice. We have sent notices to 4-5 companies. We have also asked for the report of the Defence Research and Development Organization (DRDO)’s investigation."

The Centre had roped in the Centre for Fire Explosive and Environment Safety (CFEES) to probe the EV fire incidents. The agency comes under the SAM (System Analysis and Modelling) cluster of DRDO labs.

Earlier last week, Union Minister Nitin Gadkari had informed the Parliament that notices have been sent to the Managing Directors and CEOs of the EV makers to reply to a show-cause notice. No specific date has been shared by the ministry or the investigating agency regarding the deadline by which these EV makers are supposed to reply.

EV fire incidents in India caught everyone's attention after an Ola Electric S1 Pro scooter caught fire in Pune earlier this year. Later, in a series of other incidents involving electric scooters from Okinawa, Pure EV, Jitendra Electric Vehicles among others, at least six people were reported killed. Some of the EV makers, including Ola Electric and Okinawa, were forced to recall their electric scooters amid claims of faulty batteries leading to fire. While Okinawa had recalled 3,215 units of vehicles, Pure EV recalled 2,000 units and Ola Electric recalled 1,441 units in April.