Okinawa dealership goes up in flames due to ‘electric short circuit’

Okinawa says a fire incident at one of its dealerships in Tamil Nadu was caused due to an electric short circuit.
By : Prashant Singh
| Updated on: 18 Apr 2022, 04:36 PM 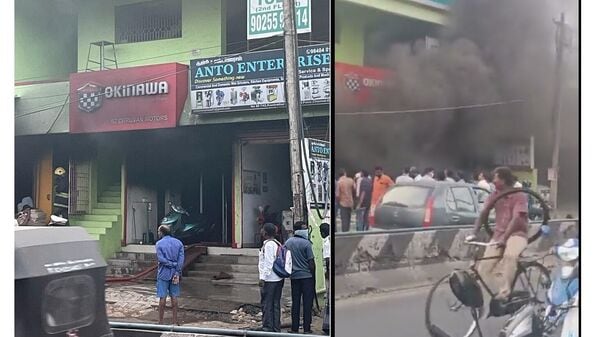 Okinawa dealership can be seen engulfed in thick black smoke due to a short-circuit in the building.

As mercury levels rise in the country, incidents of several electric scooter catching fire have made headlines in the past few days. Soon after an Ola Electric scooter went up in flames, an entire truck reportedly carrying over 40 Jiterndra EVs was charred to ashes due to EV fire. And now a new incident has come up to light from Tamil Nadu where in an Okinawa dealership was seen bursting in flames.

While previously the fire was reported to have been spread due to an EV fire, the company has officially said in a statement that it was in fact caused due a short circuit in the building. “The fire was due to an electric short circuit in the panel wiring in the building. The dealership has also confirmed the same," Okinawa said in response to HT Auto's query on the incident.

It is yet unknown as to how much damage the dealership has suffered due to the fire, but from the black smoke ball visible in the image, it is hard to say if anything of the showroom remains.

Meanwhile in other related incidents, many of the Pure EV dealers are now also alleging defects in batteries inside the electric scooters. "There are problems with the batteries, too. A customer had dropped off a battery with us complaining about a drop in range. The battery exploded in my showroom and caught fire. Fortunately my staff was safe," says Vivek Ranjan who owns a dealership in Bihar's Lalganj. (Read full details here)

Also, Okinawa has also recently recalled 3,215 units of Praise Pro scooters with immediate effect in order to address suspected battery-related issues.  Okinawa is one of the best-selling electric scooter brands in the country and recently launched the Okhi90 high-speed e-scooter model here.