Hyundai Ioniq 6 has been officially launched in the South Korean market as one of as many as 31 all-electric models planned by the Hyundai Motor Group.
By : Shubhodeep Chakravarty
| Updated on: 14 Jul 2022, 11:45 AM In a massive bid to increase its market share in the global electric vehicle (EV) playing field, Hyundai Motor Co has officially launched its first electric sedan called Ioniq 6 in its home base of South Korea. With an eye to challenge Tesla and possible reduce the lead that the US company has in the EV space, Hyundai Motor Group has plans of launching as many as 31 all-electric models till 2030.

The Hyundai Ioniq 6 may be just one of the many EVs planned by the Koreans but it is being touted as the most significant one as it is the first all-electric sedan from the company and one that would likely go head-on against the Model 3, Tesla's best-selling EV which is also a sedan.

Combining forces, Hyundai and Kia - under the Hyundai Motor Group banner, have been looking to make significant in roads in markets where EVs are gaining wider acceptance. While China remains the biggest automotive market as well as EV market and while Tesla has a formidable market share here and the world over, the Koreans are appearing more determined than ever before to ensure a product offensive ushers in a change of tectonic proportions.

As such, the Ioniq 6 will have to fight a massive battle.

The Hyundai Ioniq 6 design from the outside is likely to divide opinions because while it does have a smart face, it isn't radically sporty or modern. The Hyundai designers have given it a clean-cut image and the swooping roofline - best seen from the side - gives it a coupe-ish profile, complete with a Porsche-like spoiler at the rear. 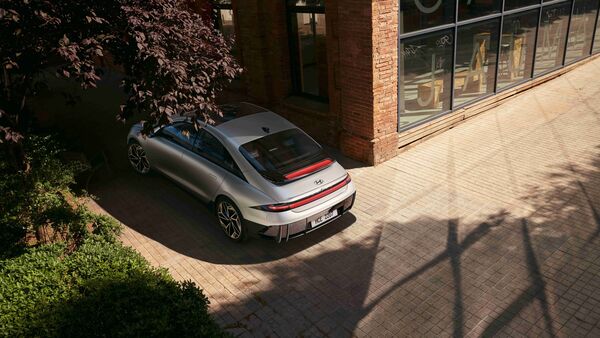 Hyundai Ioniq 6 has a streamlined body profile in order to help its aerodynamics and enhance range.

LED lights are all around the EV and the Ioniq 6 stands lower than conventional Hyundai sedans - a deliberate move to enhance aerodynamics. 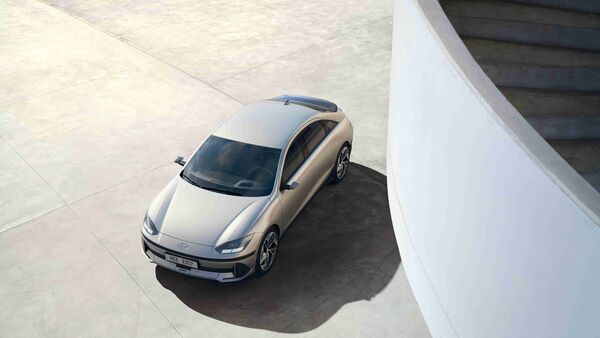 The Hyundai Ioniq 6 is longer, has a longer wheelbase, is wider as well as taller than the Tesla Model 3.

The Hyundai Ioniq 6 gets a long-range 77.4 kWh battery pack and this is paired with two electric motors for 320 hp and 605 Nm of torque. It may also be paired to a single motor for maximum range. There is also a 53 kWh battery pack with a single motor but the official power output and torque figures have not been revealed for this.

If range is the biggest concern for a prospective buyer, Ioniq-6 claims to have a WLTP-certified per-charge range of 610 kms when the bigger battery pack is paired with a single motor.

Hyundai is also claiming that the base variant of the Ioniq 6 would be the most energy-efficient car anywhere around the globe with energy consumption at under 14 kWh per 100 km.

But if someone is looking to extract the maximum performance from the EV, Hyundai claims that the Ioniq 6 can hit 100 kmph in 5.1 seconds in the dual-motor set up and in around seven second with the single motor.

Being the latest Hyundai EV, the Ioniq 6 is absolutely packed to the brim with tech-based features. 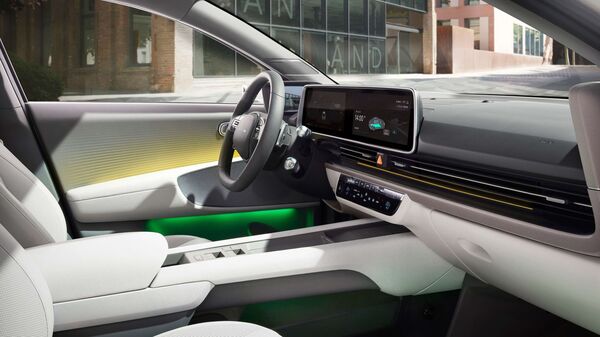 A look at the dashboard layout inside the Hyundai Ioniq 6.

The list is dominated by a 12-inch main infotainment unit inside, multiple USB Type-C and Type A ports, support for Android Auto and Apple CarPlay, 64-colour ambient lighting, Relaxation Comfort Seats at the front, among others.