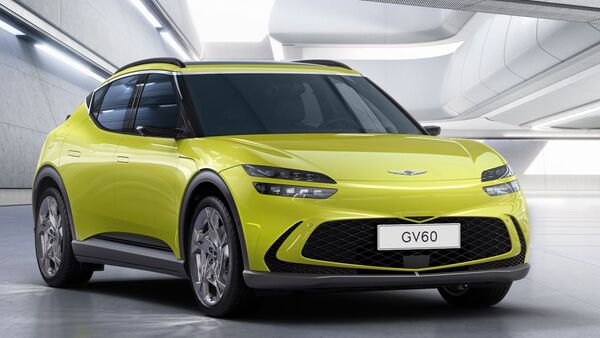 Genesis GV60 is likely to offer an ultra-fast charging option of 350kW.

Hyundai-owned luxury car brand Genesis aims to launch an electric car offensive this decade in order to grab a hot spot in the global electric luxury car market. The automaker is poised to bring seven more electric cars by 2030, additionally after GV60. The automaker plans to go completely electric in the next decade. Genesis has already announced that the company will launch its final internal combustion engine-powered car in 2025.

Genesis has said that all the eight bespoke electric cars from the brand will be underpinned by Hyundai's E-GMP architecture, which is shared by several models from Hyundai and Kia as well. Autocar reports that the upcoming GV60 will serve as the first taste of things to come from the seven other EVs from Genesis, which will replace the company's first-generation models over the course of this decade.

Speaking about the upcoming models, Aston Martin's chief creative officer Luc Donckerwolke said that the EVs won't be defined by their physical footprints, but their interior proportions. He said that the E-GMP platform will give electric cars a longer wheelbase and more space inside the cabin. Hence, these Evs cannot be compared with the current ICE lineup.

He also highlighted that the Genesis GV60’s cabin is larger than an ICE car of similar size. he also said that in the future, flat-floored platforms will have a scale-up effect on Genesis' models. As a result, the all-electric successor to the outgoing Genesis GV80 will come larger inside, but not at the exterior.

Genesis is also expected to use the extended-wheelbase variant of the E-GMP platform as the production versions of recent Hyundai Seven and Kia EV9 SUV concepts. These cars will compete as flagship models from Audi, BMW and Mercedes-Benz.

One of the interesting models from Genesis could be last year's X concept, which could be positioned against Porsche Taycan. This will use the most potent motor configuration of the E-GMP architecture.