Aura will comepete against Dzire from Maruti Suzuki and Honda's Amaze.While Aura will be targeted at personal car buyers, Xcent will be directed towards fleets and cab aggregators.Aura will make its global debut on December 13.
By :
| Written By : Shubhodeep Chakravarty
| Updated on: 28 Nov 2019, 14:21 PM 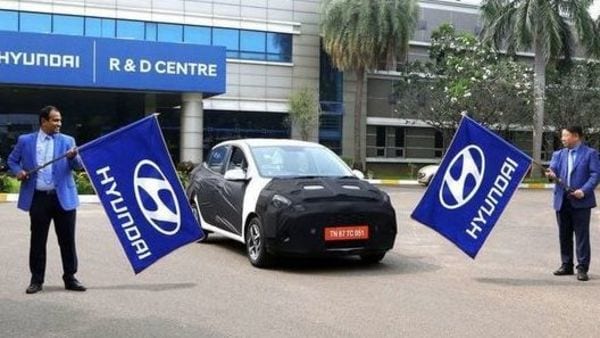 Hyundai always played catch up to its rivals in the compact sedan category in India but the Koreans are readying to bare knuckles and take the fight to Honda's Amaze and Maruti Suzuki's sensationally popular Dzire. Pinning hopes on Aura, its upcoming compact sedan, Hyundai is promising contemporary looks and decent performance in a typically feature-loaded package.

The Aura, on paper at least, has the potential to ruffle feathers aplenty in its category which currently also has Hyundai's very own Xcent. So, the question emerging as we close in on Aura's launch is what happens to the Xcent and how is the new car going to be different from it?

When news of the Aura being considered first emerged, there were speculations that Hyundai will retire Xcent. With time, however, a number of media reports have had company officials rebuking this and instead, have said that Xcent will continue to be in production and will primarily be targeted towards fleets and cab aggregators.

The Aura, on the other hand, will be presented as a premium offering in the sub-four metre sedan segment which also has the likes of VW Ameo and Skoda Rapid.

So how does Hyundai plan to make Aura a standout option from the Xcent?

For starters, the Aura's design is likely to bear a semblance to that of the Grand i10 Nios. And that is a good thing. The headlights and the grile on the smaller car give it a tasteful appearance and is sure to work just as well for the Aura. From the side, the Aura's profile language is expected to be similar to that of Xcent but it is likely to get completely new rear profile with a revamped tail light set up.

Hyundai has already confirmed that under the hood, the Aura will get three engine options - 1.2 Kappa Dual VTVT petrol, 1.0-Turbo Dual VTVT petrol and 1.2 U2 CRDi diesel. There will also be an auto option 1.2 petrol and diesel versions.

On the inside, expect Aura to be miles ahead in terms of quality of materials as well as features than the Xcent. The new car may get all or most of the following, at the very least:

Targeted specifically at personal buyers, the Aura's positioning would be key and would also depend on the price point it is launched at. Under-cutting the price point of Dzire and Amaze would be quite a triumph but that, if at all, remains to be seen.

The Aura will make its global debut on December 13 and will be officially launched at the Auto Expo in February of 2020.