Home Auto Cars News World Premiere Of Mercedes Eqs On April 15: All You Need To Know

World premiere of Mercedes EQS on April 15: All you need to know 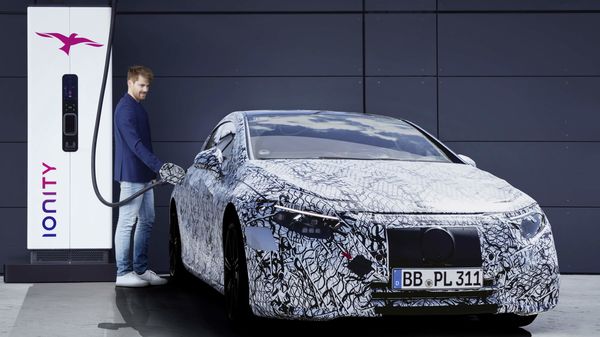 Mercedes EQS is the automaker's first EQ badged electric car that has been developed from scratch.

Mercedes-Benz is ready to unveil the EQS premium electric sedan on April 15. The German luxury carmaker has already revealed several EQ-badged cars including EQA, EQC, and EQV. However, all of these electric cars are just zero-emission versions of the GLA, GLC, and V-Class respectively. On the other hand, the upcoming Mercedes-Benz EQS is the first ground-up EQ badged car from the automaker. Also, this is going to be the flagship sedan of the brand.

Ahead of the unveiling of this electric car, here are some key facts about the all-new Mercedes EQS.

The EQS gets a smooth-surfaced design sans character lines. The front corners of the car are heavily tapered to reduce the frontal area. The cooling vents have air shutters that open and close, depending on the cooling requirements of the electric powertrain and brakes.

The EQS boasts a large fastback-style tailgate that hinges from above the top of the rear screen, a layout also set to be adopted by the EQE. The EQS' full-width taillight is similar to the one on the EQC and EQA.

As Mercedes claims, the upcoming EQS will be the most aerodynamically efficient car in the world with 0.20 drag, thanks to its design. The smooth design minus any character lines is a vital element to achieve the record-breaking aerodynamic figure. Besides that, it also gets an uncharacteristically low front profile featuring a fully enclosed black panel grille, as displayed on the EQS concept car showcased in 2019.

The car has been tested at Mercedes-Benz’s wind tunnel in Sindelfingen, Germany. In January 2021, American EV maker Tesla claimed a drag co-efficiency of 0.208 for the facelifted Model S, beating the 0.21 of the Lucid Air. Hence, the EQS beats the new Tesla Model S as well.

First car to be underpinned by EVA platform

The Mercedes EQS is the first car to be based on Mercedes-Benz’s EVA platform. This modular architecture is exclusively designed for electric cars. Besides the EQS, this platform will also underpin the upcoming EQE sedan, EQE SUV and EQS SUV, among other upcoming models.

Inside the cabin of the EQS, it gets a unique dashboard and controls. The steering wheel is similar to that available in the S-Class, with capacitive touchpads on the spokes. There is a high-mounted centre console, underneath which are sizeable stowage bins.

It gets a digital MBUX Hyperscreen that consists of three separate displays integrated behind a single 141 cm curved panel. The hyper screen runs on the latest version of the MBUX operating system, which has an eight-core CPU, 24 GB of RAM and supports OTA software updates.

Other features include a head-up display with augmented reality, a 710W Burmester surrounds sound system with 15 speakers and a high-efficiency particulate filter.

The Mercedes-Benz EQS is claimed to be offering a whopping 700 km driving range on a single charge. The German luxury carmaker has developed a dedicated battery pack for the EQS that will deliver more than 700 km range when fully charged. This battery pack will be powering some other future Mercedes electric cars as well.