Home Auto Cars News With Eyes Peeled On India, Citroen C3 Unveiled To The World, To Launch In 2022

With eyes peeled on India, Citroen C3 unveiled to the world, to launch in 2022

Citroen C3 is based on the Common Modular Platform which also underpins the upcoming Tata Punch micro-SUV.Once launched in India, Citroen C3 is expected to compete against the likes of Nissan Magnite and Renault Kiger.
By : HT Auto Desk
| Updated on: 16 Sep 2021, 15:28 PM

Citroen has unveiled the C3 SUV in India.

The ‘Made in India, Made for India’ Citroen C3 sub-compact SUV was officially unveiled for the world on Thursday and is now gearing up to make its debut in the country. Citroen previously drove in the C5 Aircross as its debut product in India but a relatively high pricing meant that the mid-size SUV was unable to make much of an impact. Here is also where Citroen C3 could possibly rake up numbers as all indications point to a car that is competitively priced.

Citroen C3 will be locally manufactured at the French auto giant's Thiruvallur facility near Chennai in Tamil Nadu. The carmaker has said that almost 90 percent of the car's production will be done locally.

Citroen C3 is being billed by the French carmaker as a 'hatchback with SUV cues'. It is based on the Common Modular Platform (CMP). Citroen says the platform is electric-ready, which means that there could be an EV version of C3 in future too.

Vincent Cobee, CEO at Citroen, said, "C3 is our trade name for all of our B-segment hatchbacks around the world, which doesn’t mean it’s the same model everywhere. This New C3 differs from the European version as its design has been inspired by and for the countries in question, in order to offer a unique solution that fully conveys the Citroen identity."

Saurabh Vatsa, Citroen's Brand Head in India, said, "The C3 is being introduced in a B-segment, which is highly competitive in India but has the potential to expand and grow further. This segment is seeing a lot of young buyers who want a sub-4 metre car, which is an extension of their personality. The C3 is positioned in that sweet spot and will appeal to the young generation of customers in India, who are looking for differentiated experiences."

Measuring less than four metre in length, C3 has a smart face with LED head light and DRL units on either side. The two chrome bars on the bonnet splits into two DRL units on both sides. It gets a sporty bonnet design, coupled with flashy alloys as well as LED tail lights.

The Citroen C3 will come with 180 mm of ground clearance which should be good enough for bad roads. It also has a 10m turning radius, making it an easily manoeuvrable vehicle. 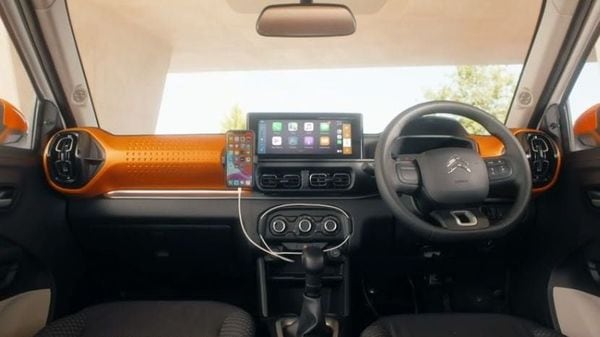 Interior of the Citroen C3 SUV.

Citroen C3 gets a freestanding 10-inch touchscreen infotainment screen with Apple CarPlay and Android Auto compatibility and is packed with a number of speakers, among other creature comforts. It gets a one litre glovebox and 315 litres of boot space. One also gets a phone clamp on the Citroen C3 for the front passengers. The clamp is positioned next to the AC vents on the dashboard.

Citroen has not revealed any details about the engine yet. However, it is likely to get a 1.2-litre turbo-charged motor which belts out 130 bhp and is likely to be mated to a seven-speed automatic gearbox as well as a five-speed manual unit.

Citroen C3 will be the French auto giant's second offering in India after the C5 Aircross SUV. The French carmaker has confirmed that C3 will hit the Indian roads by early next year. The 2021 Citroen C3 SUV is likely to take on rivals in the subcompact SUV category, like Maruti Suzuki Vitara Brezza, Hyundai Venue, Kia Sonet, Nissan Magnite, Renault Kiger, Mahindra XUV300 among others.