Why the new Batmobile in upcoming Batman movie could disappoint fans

The beefed-up exterior on a possibly customised Dodge model makes it look like a muscle car and is a departure from the sleek-looking models driven by Batman in earlier movies.
By : Sabyasachi Dasgupta
| Updated on: 04 Jun 2020, 11:03 AM 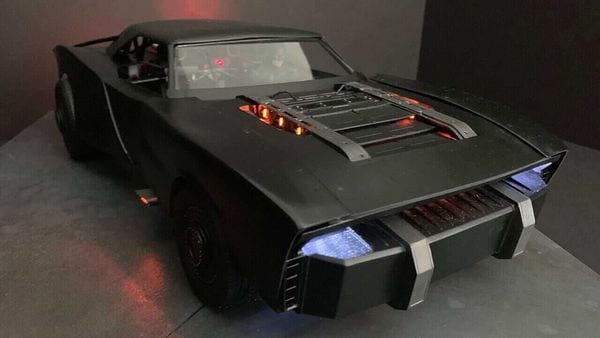 Photos of the new Batmobile was leaked on social media platforms giving a glimpse of what the new model will look like. (Photo courtesy: Twitter/@TheBatrobert)

The Batman movie starring Robert Pattinson is still in the production process. And no Batman movie is complete without his ride - the Batmobile. Recently, a series of pictures of the new Batmobile has surfaced, giving a hint at what the designers are up too.

The latest Batmobile that will be driven by Pattinson was actually released a few months ago. Although in the dark, the newest Batmobile looks different from the existing versions. This Batmobile is like a muscle car sedan. The face of the Batmobile is now clearer to be seen from various sides.

The photos reportedly were shared by Hollywood designer Jeff Frost on his website, though they were removed later. However, Batmobile fans on social media were quick to pounce the leak and share them to the world.

Concept Model Maker Jeff Frost posted some pictures of a model of #TheBatman's Batmobile on his website! pic.twitter.com/xHNkj6WYtv

There are many visible changes in the new Batmobile shown in the pictures. The hood and front bumper get a high-tech and futuristic look. Even the Black doff paint perfects the look of the Batmobile. In the trunk there is trimming in the middle. The empty space is now crowded with engines and exhaust systems from the car complete with hefty pipes.

Another thing that is quite striking is the use of orange accessory lights on the hood. The light came out from the cracks of the grill and the hood gave a frightening glut.

However, the overall design of the scale model pictures do not evoke the same awe as the previous Batmobile models. The beefed-up exterior on a possibly customised Dodge model looks overdone and a departure from the sleek-looking models driven by Batman in earlier movies. Moreover, compared to the sleeker and futuristic concept cars being unveiled these days, the new Batmobile lacks the appeal it always generated among its fanbase.

Apart from these images there is no other information about the car yet. These are all subjected to further modifications since the official photos are not out yet. The designers may incorporate further changes to the new Batmobile before it is made public. The images already shared do not reveal much about the advanced features and weapons usually embedded in this car.