The Tesla Model S electric sedan was blown up along with a doll of Tesla CEO Elon Musk, as a pocket-burning battery replacement cost infuriated the owner.
By : HT Auto Desk
| Updated on: 19 Dec 2021, 10:02 AM 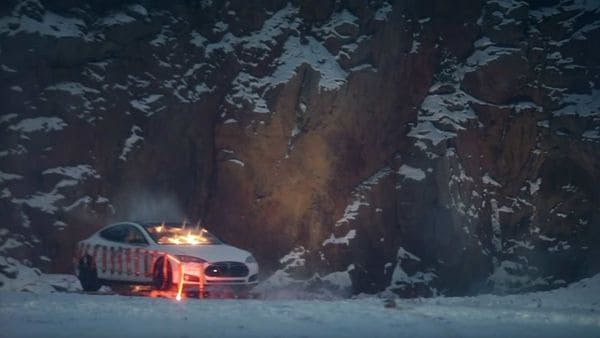 The Tesla Model S owner blew up the electric sedan along with a doll of Elon Musk. (Image: Youtube/Pommijätkät)

Tesla might be the Apple of the car world in terms of innovations and introducing new, unique technologies. However, the auto-tech company has been facing flak lately from various quarters for a wide range of issues including software glitches, faulty Autopilot semi-autonomous driver-assist system etc. Amidst these, an unhappy Tesla Model S owner in Finland decided to draw the attention of the world by blowing up his expensive electric sedan with 50 kg dynamite.

What the 2013 Tesla Model S owner Tuomas Katainen did with his car, is not because of entertainment, but to show his disappointment with the car and the EV company's service.

After having a period of pleasant experience with the Tesla Model S, the owner started facing trouble with the electric car. These included multiple error codes appearing in the instrument cluster. Hence, a tow truck was deployed to get the sedan to a Tesla service centre.

After a month, the owner received information from the EV company that the sedan can't be fixed without replacing the entire battery pack, which would cost him a whopping $22,480. As the car was around eight years old, there was no warranty available for it. There were other costs associated as well. Hence, the unhappy Tesla owner decided to blow up the car by using 30 kg of dynamite. He and his team also put a doll of Tesla CEO Elon Musk inside the car before throwing the doll out of a helicopter.

The explosion barely left a few parts of the car. However, the owner appeared to be satisfied with the outcome of the explosion. He also noted that he is probably the first person in the world who exploded a Tesla car.

While this story might draw mixed reactions, the concern here is the maintenance cost of electric vehicles after their warranty period is over. In the case of Tesla, the US-based EV major has a closed ecosystem and it doesn't allow any third-party services, which can be availed to reduce the cost for the owner.