The particular GR Yaris that Toyoda was driving was equipped with various rally-inspired parts and it was seen drifting around a set of cones.
By : HT Auto Desk
| Updated on: 14 Dec 2021, 18:51 PM 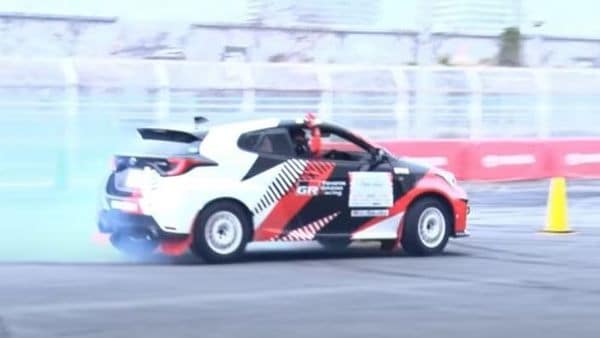 Toyota president Akio Toyoda may have made headlines giving his controversial opinions about electric vehicles, but when it comes to cars and especially high-performance ICE vehicles, he is is a genuine enthusiast who loves driving. The world got a chance to see his driving skill recently when he took the GR Yaris hot hatch for some adrenaline-pumping moves.

Toyoda was invited to an event in Tokyo recently where the Japanese automaker previewed its new WRC car and announced the motorsports plan for the 2022 calendar year.

Toyoda was seen taking the GR Yaris hot hatch and performing some stunning stunts. He took a road-going Gr Yaris to perform drifting and donuts. He was even seen waving at spectators with one hand while doing donuts, showing how much control he has over the high-performance machine.

The particular GR Yaris that Toyoda was driving was equipped with various rally-inspired parts and it was seen drifting around a set of cones. Toyoda has quite a lot of racing experience. He even competed at the 24 Hours of Nurburgring as well. It is because Toyoda the Japanese car brand has been so keen on motorsports and spawning out models like GR Yaris.

Akio Toyoda has been serving as the president of Toyota since mid-2009. Despite handling the helm of the auto manufacturer pretty well, he has come under fire in recent months by lobbying to delay the global automobile market’s transition to electric vehicles as he believes that hydrogen-powered cars should be the future, not pure electric vehicles.

In recent times, Toyoda has several times expressed his displeasure with the auto industry's shifting trend to pure electric vehicles. Instead, he advocated for using hybrid vehicles or hydrogen-electric vehicles, instead of using lithium-ion vehicles.