Watch: This man changes tyre on a moving BMW in just 1 minute 17.64 seconds 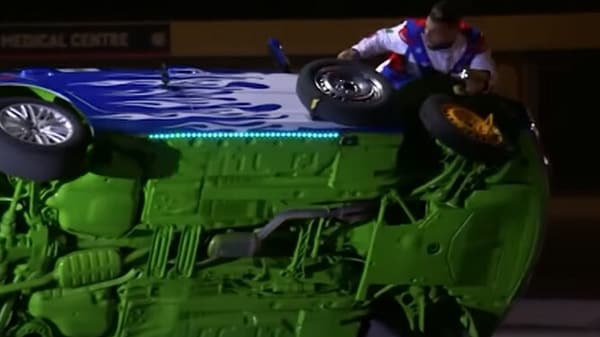 When it comes to changing a tyre of a vehicle, it is not a challenging task, but performing the same on a moving vehicle is really crazy. However, a man attempted and successfully did that to set a record on Guinness World Records. A video of that has emerged online showing how the man changes a tyre of the moving vehicle in a record time of one minute 17.64 seconds. Interestingly, that is also one of the fastest tyre change as well. The Guinness World Records also reveals that this not an one off stunt. The previous record took around 13 seconds extra to complete the whole process.

The video shows Manuel Zoldan driving an older BMW with Gianluca Folco sitting in the passenger seat. Folco starts in the passenger seat but quickly climbs out the window as Zoldan gets the luxury car up on two wheels. Clearly, this is the rule number one. When changing a tyre on the move, the wheel in question can't move.

While Zoldan slowly circles the floor with the BMW precariously balancing on two wheels, Folco removes the motionless front wheel and swaps it with one mounted on the door. While the driver shows incredible skill of balancing the luxury car on just two wheels at such a low speed, the co-passenger too displays fearless move by replacing the wheel while the vehicle is on motion.

This was truly an impressive act from the duo. However, it certainly has no application in the real world.