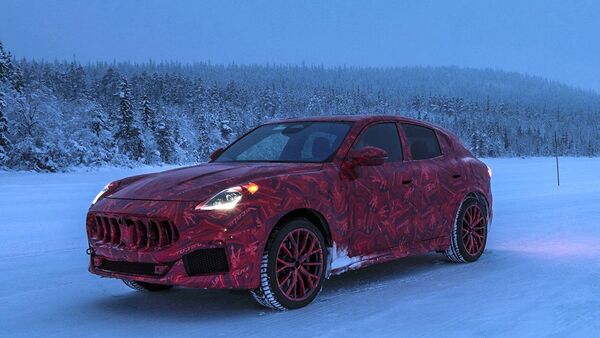 Maserati Grecale comes as the second SUV of the luxury car brand after Levante.

Maserati has tasted success with its Levante SUV and now the Italian luxury car marquee is readying its compact SUV Grecale for launch. Ahead of that, the automaker is currently testing the upcoming SUV in extreme weather conditions. The automaker has released a video on its official social media channels showing the Maserati Grecale SUV going through extreme cold weather testing in Lapland of Sweden under - 30-degree Celsius temperature.

Besides the SUV's capability to withstand extreme cold temperature, testing of the Maserati Grecale also included traction, understeer and oversteer in different drive modes. The SUV is scheduled to break cover to the world. However, the exact date is yet to be announced.

Maserati said that the objective behind the testing of Grexcale prototypes in arctic conditions was to fine-tune their start-up and drivability at extreme temperature, to check its dynamics on mixed surfaces of tarmac, snow and ice, and to maintain in-car comfort in all weather conditions, varying from a few degrees above zero to as low as -30°C in Lapland.

Maserati claims that this future SUV will play a key role in the band's product strategy in the coming years. The SUV has been named after the northeast wind of the Mediterranean Sea. The automaker has a long-standing practice of naming its cars after the world’s most famous winds and Grecale too comes continuing it, which started with Mistral in 1963 and followed by Ghibli, Bora, Merak, Khamsin and in 2016 by Levante as well.

Speaking about its design, the Maserati Grecale appears to be in line with the Maserati Levante. It gets an aggressive design, similar to Levante, but smaller in size. It will be built at Cassino. Maserati claims to be investing around 800 million Euros for the Grecale project.