Part of a promotional campaign, Lewis Hamilton gets inside Mercedes AMG-One hypercar to show off its capabilities.With 1,000 hp and a hybrid heart, AMG-One stands testament to what automotive excellence is about.
By : HT Auto Desk
| Updated on: 14 Dec 2020, 03:51 PM 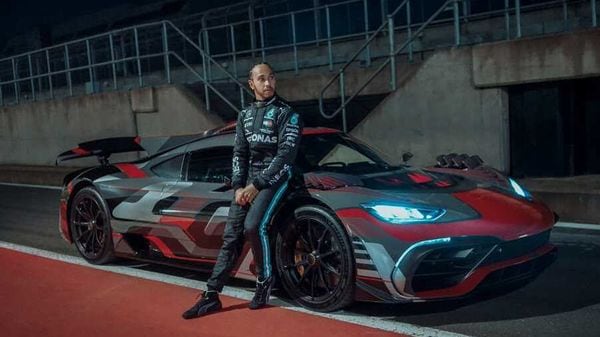 Lewis Hamilton strikes a pose next to a Mercedes AMG-One hypercar.

If thundering down tracks across the globe in a Formula One car has become a weekly routine, what does one do to enhance the thrill of seeking speed? Why, get into a Mercedes AMG-One hypercar of course. For seven-time F1 champion Lewis Hamilton, it is all about trading one for the other as he recently became part of a marketing campaign to introduce the 1,000 hp hybrid hyper beast of a car.

The current F1 season is officially over but that hardly means Hamilton is done for the remainder of the calendar year. In the video released by Mercedes, Hamilton is seen getting into one of the most menacing automotive machines ever made. Well, the most menacing Mercedes ever, at the very least. The AMG-One has been in the making for several years but is now raring to fire some time in 2021.

The video previews the production-ready version of the AMG-One as well as the E-Performance label. The car maker says that for the first time, the two-seater super-sportscar will bring the latest and most efficient Formula 1 hybrid technology from the race track to the road on an almost 1:1 basis. "I can still hardly believe that there will soon be a hypercar with a Formula 1 engine," says Hamilton who races for the Mercedes F1 team. "We won the world championship with this engine in 2015, and I was involved in its development for a long time. I was able to drive the Project ONE during the filmwork for the new campaign, and I'm very proud of the extraordinary effort Mercedes-AMG has invested in this project."

The highly-efficient hybrid power unit and the electrified front axle ensure an exciting mix of performance and efficiency. With a system output of over 740 kW (1000 hp) and a top speed in excess of 350 kmph. The 1.6-litre V6 hybrid petrol engine with direct injection and electrically supported single turbocharging comes from the Mercedes-AMG Petronas Formula 1 racing car. The four overhead camshafts are driven by spur gears. The combustion drivetrain installed as a mid-engine ahead of the rear axle is easily capable of up to 11,000 rpm.

And just in case its speed doesn't knock off your winds, its looks will surely take your breath away. For now though, its all about Hamilton thundering the machine that could well become the new synonym for sheer speed.