Volkswagen is expected to launch the new Golf GTI in the second half of the year in the United States.
By : Sabyasachi Dasgupta
| Updated on: 21 Feb 2020, 08:47 AM 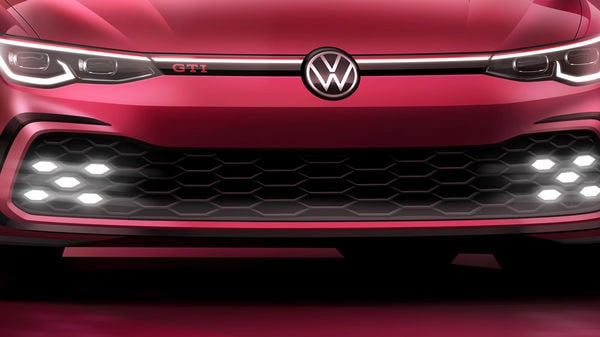 Volkswagen teased this image of the new Golf GTI

When Volkswagen launched the first Golf GTI 45 years ago at the International Motor show in Frankfurt, no one could have guessed that the three letters G, T and I would go on to identify an icon. But that is exactly what happened. Anyone referring to GTI today is talking about the Golf GTI.

Now Volkswagen is ready to present the eighth generation of this popular premium hatchback at the Geneva International Motor Show from 5 to 15 March. The company claims the new GTI is a pure, intelligent and superior high-tech sports car for the digital age.

The new GTI gets a clean design, front-wheel drive, the most agile running gear, a powerful petrol engine, insignias like the red stripe in the radiator grille, and chequered seat covers. The open front bumper gets GTI wings and honeycomb grille, optionally illuminated radiator grille crossbar, GTI diffuser with left and right tailpipes.

The new Golf GTI is one of the first compact sports cars to communicate via Car2X with other vehicles, taking safety to a whole new level. As the first sports car in its class, the Golf GTI can be driven with Travel Assist up to a speed of 210 kmph. It also gets a digital cockpit, new multifunction sports leather steering wheel with touch control, 32-colour background lighting including GTI-specific mode

This is the first generation of Golf GTI to have a completely digitalised interior landscape of displays and controls. The new generation also has both the red stripe on the radiator grille and an optional LED crossbar integrated in the daytime running lights.

Volkswagen claims that the power delivery of the GTI’s 2.0-liter turbo engine will exceed expectations. The same can be said of the running gear, which can be set precisely by the driver in conjunction with a new DCC generation (adaptive chassis control).

Volkswagen is expected to launch the new Golf GTI in the second half of the year in the United States.