Taigun SUV is part of Volkswagen's SUVW strategy, that aims to curve its niche in the growing passenger vehicle segment.Taigun SUV was first showcased as a pre-production model during the Auto Expo in February, 2020.
By : Sabyasachi Dasgupta
| Updated on: 31 Mar 2021, 11:18 AM 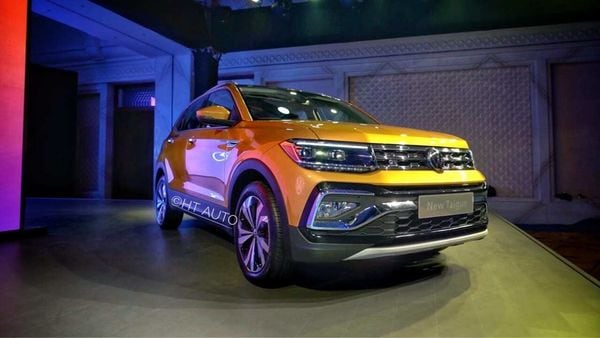 Volkswagen has unveiled the new Taigun SUV which is going to take on Hyundai Creta and Kia Seltos in the mid-size SUV segment,

Volkswagen has officially taken the covers off the production-spec Taigun SUV, which made its debut at the Auto Expo in Greater Noida in February, 2020. Volkswagen Taigun SUV is one of its first steps towards the the German carmaker's aim to increase its share in a segment that is dominated by the likes of Hyundai Creta or Kia Seltos.

For those who had the opportunity to take a look at the Tiguan during the auto show last year, there are very little visible changes in the design of the SUV. Taigun SUV carries Volkswagen's new design elements that is seen in T-Roc and will be seen in all its forthcoming vehicles.

As far as the design of Taigun is concerned, there are a lot of similarities with the T-Roc. It gets a prominent VW slatted grille at the front which is flanked by sleek-looking LED headlights and LED DRLs. The fog lamp casing is garnished in a chrome casing. The profile of the Taigun is dominated by large wheel arches which house 17-inch dual-tone alloy wheels. At the rear, the LED tail lights on either side is linked by a LED strip running across the length of the boot. There are chrome door handles, silver roof rails and blacked out B-pillars.

Based on the MQB AO IN platform, the same one used for Skoda Kushaq, Volkswagen claims to provide more space inside the Taigun SUV. Volkswagen also says that the 2,651 mm wheelbase, which is the longest in the segment, will help accentuate space inside the Taigun SUV. For instance, a negligible floor hump in the second row can help fit in three people. Though the seats are comfortable, it may still be a tight squeeze for three adults in the backseat.

While Volkswagen did not allow to shoot the interior of the Taigun SUV yet, journalists were allowed to take a peak inside. The dual-tone interior looks premium with a digital cockpit dominated by a 10.1-inch infotainment touchscreen compatible with Apple CarPlay and Android Auto, a 10.2-inch digital instrument cluster, ambient lights, ventilated seats for the front passengers and a panoramic sunroof.

Besides, Volkswagen will also pack in several safety features, like ABS with EBD, ESC, traction control, tyre pressure monitoring system and, of course, 6 airbags for passengers inside the Taigun SUV.

The Taigun SUV will be offered in two trims with the GT line trim being the top end. It will have distinctive features like GT badging on the grille, red brake callipers among others.

Overall, the Taigun SUV appears to be a premium and modern product, that can give its rivals a run for their money. Volkswagen promises that Taigun will be "competitively priced", which is expected to range between ₹10 lakh and 18 lakh. But questions are being raised whether Volkswagen is a bit too late with Taigun. The carmaker feels, despite the presence of at least two big players in the segment (Hyundai Creta and Kia Seltos) there is ample scope for Taigun to grow and ceate its own space.

Volkswagen has been in India for quite some time now, and had products in the premium category - ranging from the Polo hatchback to Tiguan SUV. Despite being the world's second largest carmaker, Volkswagen hasn't had its share of success in the subcontinent as far as volumes are concerned. In 2021, the group has decided to go on the offensive as part of its India 2.0 project and focus more on the rapidly growing SUV segment. The carmaker hopes Taigun will help it achieve a 3 per cent market share that it aims for.

Taigun SUV is expected to launch ahead of the festive season this year. Besides Hyundai Creta and Kia Seltos, it will rival other SUVs like Tata Harrier and the new entrant Skoda Kushaq.