Home Auto Cars News Volkswagen Microbus Is Ready To Be Back, With A Battery And Self Driving Tech

Volkswagen Microbus is ready to be back, with a battery and self-driving tech

The electric Volkswagen Microbus will be available in three different variants.
By : HT Auto Desk
| Updated on: 09 Jan 2022, 11:13 AM 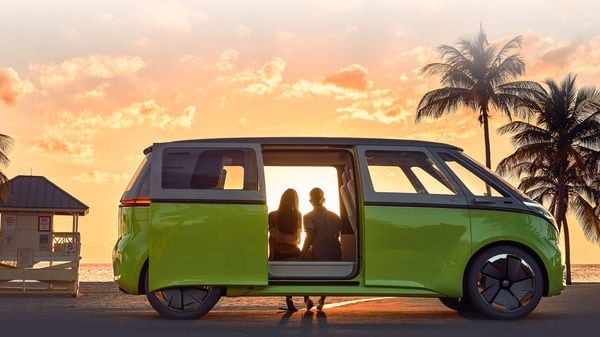 The Volkswagen ID.Buzz is going to be a key model from the German automobile brand.

An all-electric iteration of the iconic Volkswagen Kombi has been making headlines for quite some time. Now, the German automaker has confirmed that it will unveil the electric reincarnation of the Microbus or Kombi on March 9 this year. Also, Volkswagen plans to launch the electric Microbus in the US market sometime in late 2023.

Volkswagen CEO Herbert Diess on Thursday tweeted saying "The legend returns on 03/09/22!" The tweet also contained a sketch of the profile of the ID.Buzz van.

The German auto giant has shown a series of prototypes of the new Microbus over the past decade, christened as Budd.E and Bulli. However, they never made it to the production line. But the three-row ID. Buzz is the concept about which the automaker remained positive from the beginning. This shows a rebirth of the Microbus that became an icon of the counterculture movement. It comes with a pure electric powertrain and Level 4 self-driving technology along with other modern elements blending with core iconic design.

Volkswagen said that it will produce three different variants of the car. One will be meant for personal buyers, another will be for ride-hailing, and there will be a cargo variant as well. Volkswagen also said that besides a three-row variant, it will launch a two-row version as well.

The news comes just a few days after English singer and songwriter Ed Sheeran said that he would love to go for his European music tour in a Volkswagen Campervan. The automaker too initially said that it would love to collaborate with the famous singer.