The reason behind taking a Volkswagen electric campervan as his ride is to offset the carbon footprint caused by his tour, claims Ed Sheeran.
By : HT Auto Desk
| Updated on: 06 Jan 2022, 14:35 PM 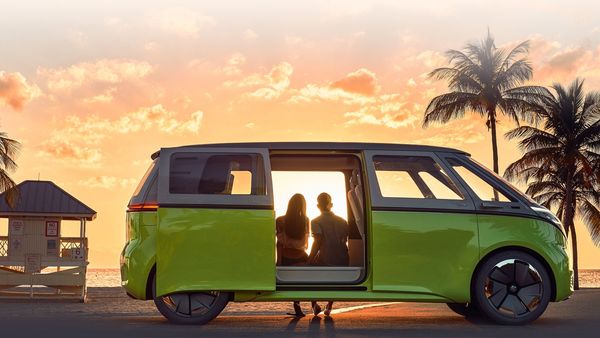 The Volkswagen electric campervan is based on the ID.Buzz concept.

English singer and songwriter Ed Sheeran is in talks with Volkswagen to use the German automaker's electric campervan as his ride during his European tour, reports The Sun. The automaker too has announced on its Twitter platform that it would happily collaborate with the famous singer for his official tour transport.

The reason behind this idea of taking a Volkswagen electric campervan as his tour transport across Europe is to offset the carbon footprint caused by his tour, claimed Sheeran. He said that he is in discussion with Volkswagen about an electric campervan. “I want to travel to every show as electric as possible," He will be joined by his wife and 16-month old daughter during the tour.

Speaking about the Volkswagen electric campervan, it comes recreating the iconic design of the Volkswagen Microbus that became very popular between 1950-1975. A few years ago, Volkswagen revealed a concept called ID.Buzz. This previewed a pure electric version of the Microbus with modern design and technology including self-driving technology.

Earlier in July 2021, Volkswagen announced that it would bring three variants of ID.Buzz electric van. As it said, there would be passenger, ride pooling and ride-hailing variants.

The automaker also said that the seating alignments and cabin of the electric campervan would be designed in three different variants keeping the focus on different market segments. However, there would be some similarities in terms of technology onboard. All three variants of the Volkswagen ID.Buzz electric van would get a Level 4 autonomous driving system, as the German auto giant claimed.

The Volkswagen ID.Buzz derived all-electric campervan is going to be a key model from the German automobile brand in its strategy for a zero-emission fleet. This EV is going to be one of the major models from the brand by 2030. Before that, pushing it as an official tour vehicle for a famous singer like Ed Sheeran would grab some eyeballs for the automaker.