Volkswagen debuts ID.Life concept electric car that can double up as mini cinema

Volkswagen ID.Life can be flexibly used as a mini cinema or a gaming centre or simple an open-air relaxing platform.The seating design of the ID.Life is flexible too as it has been made with the concept of car as a companion for all situations.
By : HT Auto Desk
| Updated on: 06 Sep 2021, 04:49 PM 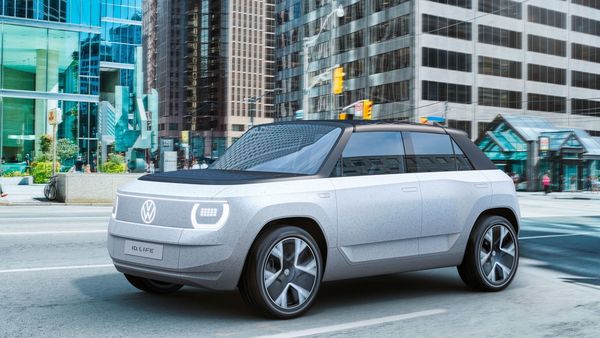 Volkswagen has taken the wraps off the ID.Life small electric concept car, debuting it at the 2021 IAA Munich auto show. Thee fully electric entry-level car will be launched in 2025 at a cost of around 20,000 euros ($23,730) as the company aims to make battery-powered models more affordable to the masses.

With the unveiling of the compact crossover concept car, Volkswagen aims to showcase its digital technology, timeless design and innovative interior. The automaker claims that ID.Life's sustainability and digitalisation can be combined to make its use flexible. The vehicle can be used as a mini cinema or a gaming centre or simple an open-air relaxing platform.

The Volkswagen ID.Life is being touted as the vehicle of future that can offer much more than just transportation to its owners. “The car of the future will be about lifestyle and personal expression. The customer of tomorrow won’t simply want to get from A to B; they will be much more interested in the experiences that a car can offer," said Ralf Brandstätter, CEO of the Volkswagen brand.

The compact electric car's design carries a simplistic theme and decorative elements have been eliminated. Volkswagen says that the horizontal division between the body, glass surfaces and roof also contributes to the car's purist appearance. Its removable roof has been made of air chamber textile that lends an open-air feeling in the ID. LIFE. Volkswagen ID.Life small electric car is based on a smaller variant of Volkswagen’s modular electric drive matrix (MEB) and gets front-wheel drive.

The concept vehicle's interior is claimed to be multi-functional and comes with a video game console and projector, as well as a projection screen that extends from the dash panel when required. The seating design of the ID.Life is flexible too as it has been made with the concept of ‘car as a companion’ for all situations and lifestyles.

The small electric car is based on a smaller variant of Volkswagen’s modular electric drive matrix (MEB) and gets front-wheel drive. With a 172 kW (234 PS) electric motor, the ID. LIFE can accelerate from zero to 100 km/h in 6.9 seconds, while its 57 kWh high-voltage battery enables a range of some 400 kilometres (WLTP).

The ID. LIFE is sustainable also in terms of the materials. On the body, wood chips are used as a natural colouring agent along with a bio-based hardener. The air chamber textile for the roof and front cover is made from 100% recycled PET bottles. Bio-oil, natural rubber and rice husks are just some of the materials that serve as a basis for the tyres on the ID. LIFE.

With the introduction of ID.Life in its electric vehicle fleet, Volkswagen is forging ahead with its electrification plans. By 2030, the company aims to increase the share of all-electric models in total vehicle sales in Europe to at least 70 per cent and in North America and China to at least 50 per cent.