Volkswagen has teamed up with Argo AI to develop the autonomous ID.Buzz electric vehicle.Volkswagen ID.Buzz self-driving prototype will be showcased at the 2021 IAA Munich auto show.
By : HT Auto Desk
| Updated on: 07 Sep 2021, 13:40 PM 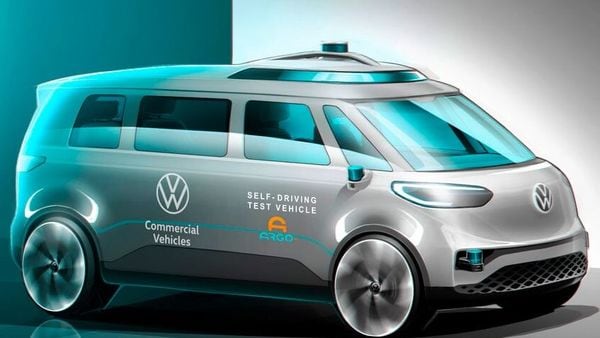 Volkswagen's self-driving vehicle is in news again as the company's chief Herbert Diess shared more information about it ahead of the 2021 IAA Munich auto show. Co-developed with Argo AI, Diess, with Agro AI's founder Bryan Salesky, announced that the electric ID. Buzz is a few months away from public road testing. We’re very close," Salesky told Bloomberg. Volkswagen and Argo together will debut their autonomous electric prototype at the Munich auto show.

The ID.Buzz prototype is an electric iteration of the popular microbus from Volkswagen that was introduced in the 1960s. Though now it looks quite futuristic with its rooftop Lidar system and heavy sensors. This autonomous electric vehicle also features radar sensors, cameras and an onboard computer that can that look up 400 metres ahead of the EV to detect any hurdles. The system has been developed by Argo AI.

Coming to the software integrated into the vehicles, a report by Car and Driver stated that specialists from 33 countries are working on the software that will make it capable of constant improvements. Salesky said Volkswagen and Argo have been working closely on both mechanical and software systems to control braking, throttle and the high-powered computer that will control these vehicles. However, both refrained from divulging any technical specs about the vehicle. In the report, Salensky gave some insights as to why autonomous driving is difficult for several reasons. He mentioned that the computer needs to predict the behaviour of pedestrians, cyclists and other vehicles on the way.

For now, the automaker plans to focus on urban areas first where the ID.Buzz will be used as autonomous shuttles and for delivery services, added the report. However, by 2025, Volkswagen plans to deploy the ID.Buzz in Hamburg, Germany for the transportation of people and goods.