Toyota Innova Hycross nameplate registered in India. What it means? 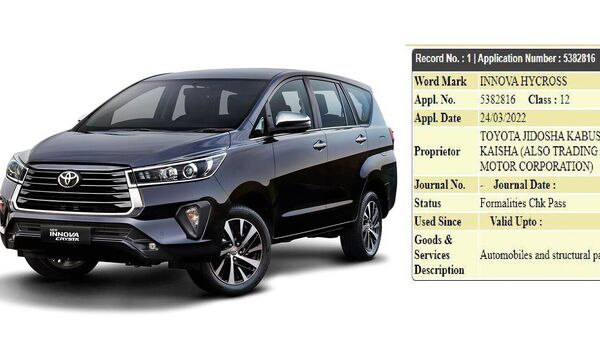 Toyota Innova Hycross nameplate registered in India. It may be used for a hybrid version of the Innova in the country.

Toyota is planning on extending its portfolio in the Indian market. Only recently, it was seen testing the new-gen model of the Innova Crysta that is set to be introduced on the global level soon. The company has now filed for a trademark of the ‘Innova Hycross’ nameplate in India. While the details remain on an early stage, there are rumours of this model being a hybrid version of the famed Innova Crytsa.

Other factor which also fuel this fire is the launch of company's new ‘Toyota Hum Hain Hybrid’ campaign which, as the name suggests, promotes Hybrid technology for its upcoming products in the country. One such model is said to be its upcoming Creta rival compact SUV. Currently the Fortuner-maker has two hybrid models in the lineup including the Camry and Vellfire.

If rumour are to go by, the Innova Hybrid is likely to see the light of day next year, while the production is said to begin late 2022. A variant of the Innova has also been spotted getting tested on the Indian roads, and the same could also be presumed to be the model in concern.

The prototype of the large-sized premium MPV was seen sporting a very similar size and silhouette when compared to the existing model. In addition, design elements such as Innova style glasshouse with quarter window ahead of the C Pillar were also seen to be exactly the same as the standard model. While the existing car features the same body-on-frame chassis as the Fortuner and Hilux, the next gen Innova Hycross could however employ a TNGA platform.

For the record, the existing model comes with a 2.7-litre petrol and 2.4-litre diesel engines, the upcoming car could use the former along with an electric motor. Meanwhile, Toyota has also recently showcased an EV version of the Innova Crysta MPV.