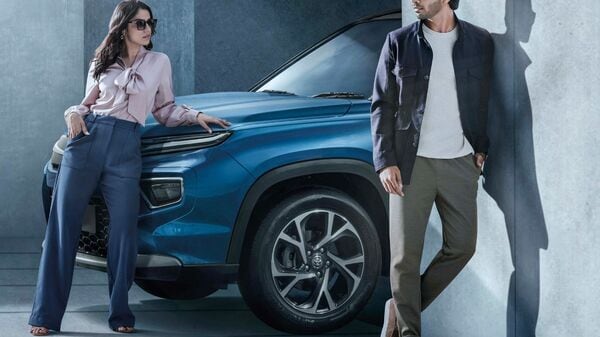 Toyota India has dropped another teaser of its upcoming 2022 Hyryder SUV which could be known by the name ‘Urban Cruiser Hyryder’. The company has teased the front quarter of the midsize SUV in a new image that shows clear details of the car's alloy wheels design. Apart from the wheels, the photo also throws light on the fog lamps that have been placed directly beneath the high-raised sleek-looking LED DRLs. The teaser also clearly reveals the blacked-out front main grille featuring a honeycomb design. Beneath the lower grille can be seen a silver-coloured bash plate on the front bumper which gives it a rugged look.

Also, what needs to be noticed is the fairly squared-off wheel arches with minimal black cladding, adding to the muscular looks of the SUV. And what further amps up the muscular visuals of the car is the use of large wheels which will come shod with Apollo Apterra tyres as standard. The SUV can be seen finished in Toyota's “Nebula Blue" paint shade which is also found on its other SUVs like the Corolla Cross.

In terms of exterior dimensions, expect the model to sit as a four-metre-plus vehicle which will be considerably bigger in size than the existing Toyota Urban Cruiser SUV. Under the hood, the company has revealed that the car will be seen with mild-hybrid tech supplied by Maruti Suzuki and a full-hybrid system from Toyota. More specifics will be announced around its official debut next month.

The car will also have a Maruti's version that will follow very soon, perhaps, sometime around later in July or August. Both the cars will be built at Toyota’s Bidadi plant number 2 in Karnataka. Manufacturing of both cars will commence in August. While the Toyota Hyryder will go on sale in India first, the Maruti's version will follow next which will be sold from Nexa chain of dealerships.