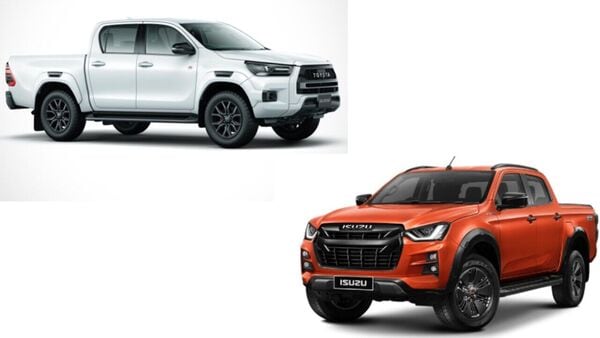 Toyota Kirloskar Motor recently launched its Hilux lifestyle pickup truck in India. The Japanese car brand aims to create a niche in the Indian auto market for itself with the Hilux.

The Toyota Hilux pickup truck will have a direct rival in form of the Isuzu V-Cross upon launch in March. The premium pickup truck has already sold more than 20 million units in over 180 countries since its introduction back in 1968.

This also comes to India at a time when pickup trucks are revitalising their appeal around the world. Several major automakers are even introducing electric variants of their famous pickups.

Before the Toyota Hilux and Isuzu V-Cross lock horns with each other in India, here is a specification comparison of the two models.

Toyota Hilux is expected to be priced at around ₹30 lakh (ex-showroom). Its direct rival Isuzu V-Cross recently had a price hike. The pickup truck now comes priced between ₹18.98 lakh and ₹25.49 lakh (ex-showroom), depending on different variants.

Under the hood, the Toyota Hilux gets a 2.8-litre, four-cylinder turbo-diesel engine that also works in the Toyota Fortuner. The engine is capable of churning out 204 hp of peak power and 420 Nm of maximum torque. Expect the Toyota Hilux to produce similar power and torque outputs. This pickup truck is likely to be available with a six-speed manual and a six-speed torque converter automatic gearbox.

Isuzu V-Cross gets power from a smaller 1.9-litre Ddi four-cylinder turbocharged diesel motor. The engine is available with the option of a six-speed manual and a six-speed automatic gearbox. Power is sent to all four wheels through an AWD. The engine is capable of churning out 163 hp of power and 360 Nm of torque.