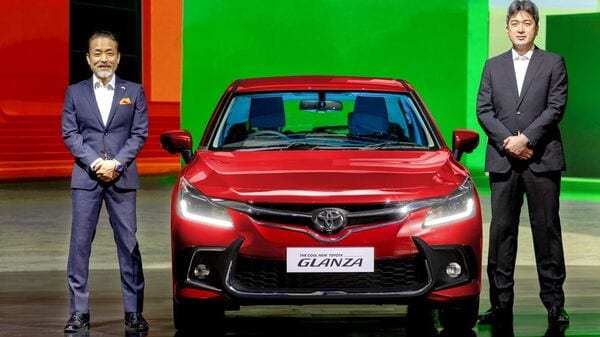 The new Toyota Glanza comes out as a rebranded version of the Maruti Baleno hatchback which also received an update recently.

Toyota Kirloskar Motor is planning to launch a CNG variant of the premium hatchback Glanza, which is based on the Maruti Suzuki Baleno. TKM has already hinted at an upcoming Glanza CNG hatchback on its website, revealing the possible fuel efficiency at 25 kmpl. However, the automaker later revoked the post. The post also revealed that the upcoming CNG variant of the car will be christened as Toyota Glanza e-CNG.

The automaker has not divulged any details about the launch time of the Glanza e-CNG. However, expect it to come to the showrooms sometime in the next few months. Also, it will work with the same K-Series engine that works under the hood of the recently launched new Glanza.

Toyota Kirloskar Motor introduced the 2022 Glanza a few days ago at a starting price of ₹6.39 lakh (ex-showroom). Expect the upcoming CNG variant of the car to be priced slightly higher. It could be priced around ₹70,000 higher than the petrol variant.

The Maruti Suzuki Baleno and Toyota Glanza both share the same 1.2-litre petrol engine that churns out 90 PS of power and 113 Nm of torque output. Both the cars are offered with a five-speed manual gearbox and a five-speed AMT gearbox option. With the Glanza CNG slated for launch, it can be assumed that a Baleno CNG too is under development. With the Maruti Suzuki working harder for Nexa range of CNG cars, the assumption gets stronger.