New Toyota Glanza has been launched as a completely revamped version of the older car.2022 Glanza has been introduced with tweaked exterior looks and a range of new features.
By : HT Auto Desk
| Updated on: 15 Mar 2022, 12:25 PM 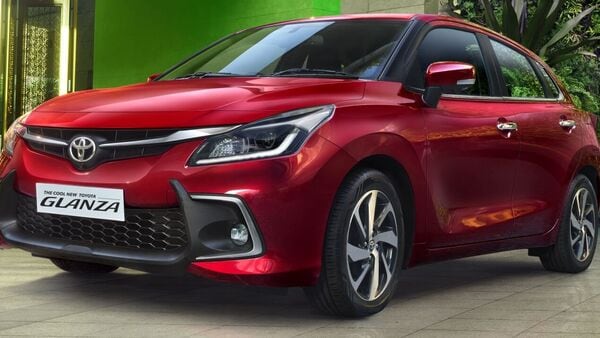 The new Toyota Glanza comes out as a rebranded version of the Maruti Baleno hatchback which also received an update recently.

All-new Toyota Glanza has been launched in the Indian market starting at ₹6.39 lakh (ex-showroom, Delhi). The 2022 Glanza has been introduced with newly revamped exterior looks and a range of new features.

As seen previously, the Glanza comes out as a rebranded version of the Maruti Baleno hatchback which also received an update recently.

On the outside, the Glanza gets a redesigned front fascia incorporating a sleeker and curvy front grille with a chrome accent. The company has also updated the headlamps which now look more modern and sharper with the use of projector lamps and integrated LED daytime running lights. The key profile updates on the car include the use of sportier bumpers, as well as new 16-inch sporty alloy wheels. At the back, it has received new wrap-around LED taillights which are quite similar to the updated iteration of Maruti Baleno.

Inside, the new Glanza hatchback receives updates in the form of a restyled cabin with a leather-wrapped flat-bottom steering wheel, a new instrument cluster, a nine-inch touchscreen infotainment system with Apple CarPlay and Android Auto. That said, other key updates in terms of the new features include the car's connected car technology and new HUD (Heads-Up Display). Other than this, Glanza now also comes with a 360-degree camera, voice assistant, cruise control, and automatic climate control etc.

At the heart of the Glanza continues to sit the same 1.2-litre dual-VVT four-cylinder naturally aspirated petrol which belts out 90 PS of power and 113 Nm of torque.

The Glanza continues to rival the likes of other hot hatches in India including the Hyundai i20, Honda Jazz.