Both the Fortuner Epic and Epic Black editions have been made available only with a 2.8-litre diesel engine option.
By : Prashant Singh
| Updated on: 07 Apr 2020, 08:06 AM 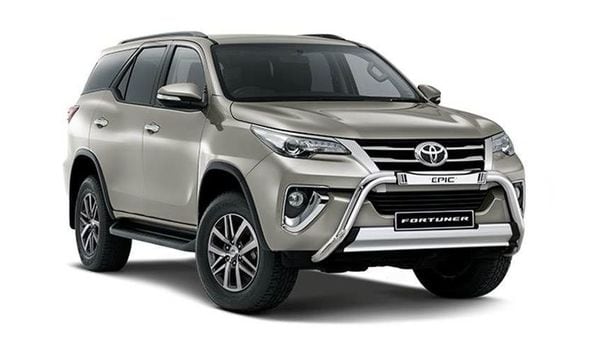 Toyota Fortuner Epic and Epic Black editions have been revealed in the international markets.

For South Africa, both of these new models have been made available only with a 2.8-litre diesel engine option. On the outside, they get a slew of additional cosmetic upgrades when compared to the regular Fortuner. Both the Epic models are essentially a replacement to the regular 2.8-litre diesel Fortuner previously on sale, since this engine is now featured only in the Epic edition variants.

As far as exterior styling tweaks are concerned, the Epic version gets a nudge bar sporting ‘Epic’ branding at the front and a tow bar (rear). Coming on to the inside, the cabin sports very subtle changes including metallic scuff plates and ‘Epic’ branded floor mats.

The other Fortuner Epic Black edition gets more aggressive styling updates such as a blacked-out roof, wing mirrors and alloy wheels with new design. It also sports the same nudge bar with 'Epic' branding but comes dipped in black colour. In terms of equipment list, both the SUVs carry the same kit as the outgoing 2.8 diesel model. Speaking of which, they get LED headlamps, auto climate control, a powered driver seat, cruise control, rear view camera, a touchscreen infotainment system and more.

In terms of mechanicals, aforementioned, both the 'Epic' iterations have the same 177 PS 2.8-litre diesel engine. This unit is capable of transmitting power via a 6-speed automatic gearbox to either two or all four wheels. The SUVs do not feature any manual gearbox option.

In previous months, Toyota India has given several updates to the Fortuner for it to meet the latest BS 6 emission norms. The company has also recently pulled the plugs on two of its models including Etios range and the Corolla Altis. The latter has been an immensely famous product, not only in India, but around the globe.

The Fortuner will see a mid-cycle update by the end of 2020.