Toyota bZ4X touches down in Europe with eyes peeled on Tesla, Volkswagen

Toyota bZ4X carries the weight of massive expectation because it is the first mass-produced all-electric vehicle from the Japanese.
By : HT Auto Desk
| Updated on: 06 Dec 2021, 12:16 PM 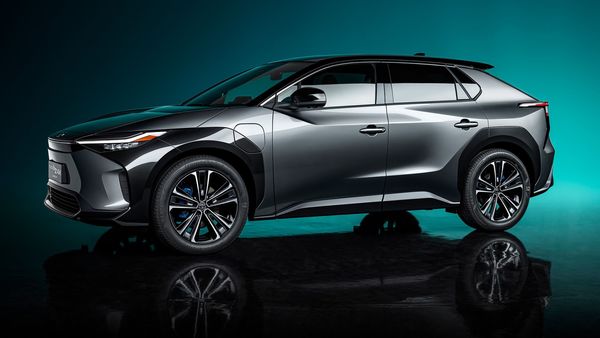 With sporty looks on the outside, a spacious cabin and a decent range, the Toyota bZ4X is looking at creating a firm base in the EV space for the company.

Toyota bZ4X is gearing up to challenge the might of Tesla and Volkswagen electric models already doing brisk business in several European markets. Ahead of its debut here next year, the first units of the first-ever all-electric vehicle from Toyota have reportedly arrived with many predicting that much of its success would depend on how well it is priced.

Toyota is betting big on the bZ4X to lay the foundation for a frontal assault on rivals in the electric vehicle space. Toyota is the world's largest car maker but has been rather slow off the blocks with its battery-powered options. But the bZ4X is being seen as a model that will help the Japanese pick up pace and possibly overtake many others who are currently seeing an upswing in zero-emission vehicles.

Toyota wants to sell only zero-emission vehicles in Europe from 2035. It is an ambitious target but one that is also possible. But to achieve the target, the bZ4X will have to set the tone. Reports suggest customers here would be given a choice between two powertrains on the bZ4X. One would be a front-wheel drive option with an electric motor giving it 201 hp and 265 Nm of torque. There will also be an all-wheel drive option which would produce 215 hp and offer 336 Nm of torque.

But while pricing may well be crucial, it is range that would be the other focus area if the rivals are to be challenged. Toyota claims that a bZ4X owner can expect a range of at least 450 kms.

Then there is a sharper exterior design that is likely to help bZ4X stand out as well. A long wheelbase, sharper body lines and sporty curves help this electric vehicle look quite contemporary. And perhaps most important of all is the claim that the battery inside the bZ4X will deliver around 90% of full range even after 10 years of operation.