Three is a crowd: Bentley Mulliner Bacalar two-seater all set for unveil

Hand built by Bentley Mulliner, the oldest coachbuilding operation in the world, the company claims that Bacalar 'is Grand Touring at its most exhilarating.'
By : Shubhodeep Chakravarty
| Updated on: 28 Feb 2020, 07:02 AM 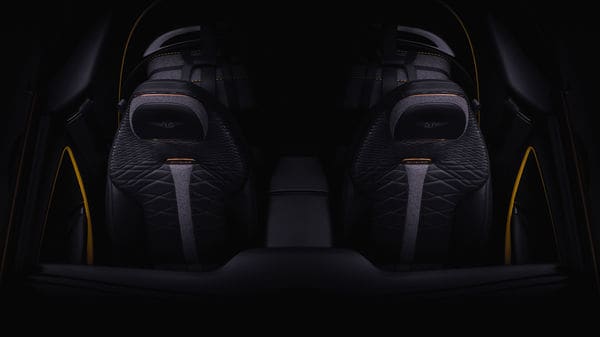 Love and luxury come together in what could possibly be a masterpiece from Bentley as the car maker gets ready to showcase the Bacalar, its first two-seater since 1930. An exquisitely plush cabin reserved for two occupants would, quite obviously, come at a sky-high price but could well be worth to those who would be able to afford it.

Bentley recently gave a glimpse into the Bacalar which would be unveiled on March 3 at Geneva International Motor Show. The ultra premium car gets a wraparound cockpit with luggage space behind the front seats which have been stitched in diamond pattern and has subtle yellow highlights.

Hand built by Bentley Mulliner, the oldest coachbuilding operation in the world, the company claims that Bacalar 'is Grand Touring at its most exhilarating.' Not much other details has been revealed but the glimpse sure has given rise to a lot of speculation with some reports suggesting that Bacalar could be a roadster and may have a convertible top. There are also unconfirmed reports that the Bacalar may feature an electric motor which could further jack up the launch price into seven figures.

Full details, however, would only be available when the Bacalar is officially unveiled for the world at the premier motor show in Geneva.

Bentley has been planning a convertible for some time now but also has an extensive lineup planned for Geneva Motor Show. The carmaker will hold he European debut of Mulsanne W.O. Edition and organise the public debut of Continental GT Convertible and the global debut of Bentley Bentayga Speed.