This Suzuki Jimny climbs overpass, puts doubts about its off-road skills to rest

The Suzuki Jimny missed a turn, climbed up and down a pedestrian overpass, only to be confronted with police.
By : Sabyasachi Dasgupta
| Updated on: 16 Apr 2020, 11:40 AM 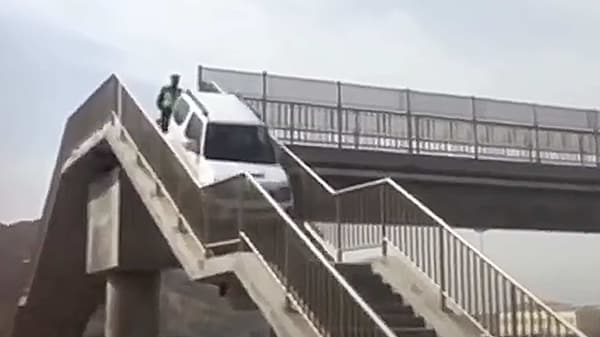 You may have seen a Suzuki Jimny pull off a lot of off-roading stunts on videos, but not this.

On Indian road, we often encounter drivers trying to backtrack after missing turns in the most bizarre ways. Some even risk lives of others while doing so. But this Suzuki Jimny has taken it to a different level.

In a video, posted by South China Morning Post, the driver of the Suzuki Jimny missed his exit on a highway. To get back, he decided to take the 'off-road' route. He drove his Jimny up a pedestrian overbridge and turned the narrow walk into an impressive show of Jimny's off-road capabilities.

With a police constantly tailing him, the driver showed nerve to manoeuvre the Jimny through stairs that one would think is too narrow for a four-wheeler. And after crossing the highway, he climbed down the overbridge, driving his Jimny quite effectively down a flight of several stairs.

Thankfully, the overbridge was empty when the driver pulled off the stunt. Once the Jimny 'landed', the traffic police fined the driver 200 yuan (around ₹2100) for the violation of rules.

The Jimny is sold across 194 countries and regions around the world and considering it is a flagship from Suzuki, it is only surprising that it has not already made its way to India. The mini off-roader was showcased at the Auto Expo in February this year.

The Jimny showcased at Expo has a 1.5-litre petrol engine at its heart and is capable power of 75 kW /6000 rpm and torque of 130 Nm /4000 rpm. It is meant to power up and through demanding terrains and therefore gets a 4WD drive system.

At this moment, there are reports that Maruti is working on a Jimny version suited for its Indian customers. But there is no official word yet on the specs or about the time when it can be expected in the market.

Meanwhile, if you are eagerly waiting for Jimny to arrive in India, this is another advertisement of its capabilities. If you ever had a doubt about the mini off-roader from Suzuki, you can put them to rest now.