New Tesla Texas Gigafactory is bigger than Pentagon, is home to Cybertruck

Tesla CEO Elon Musk was seen next to the Cybertruck on stage during the EV maker's Cyber Rodeo event to officially inaugurate the Texas Gigafactory.
By : HT Auto Desk
| Updated on: 08 Apr 2022, 09:53 AM 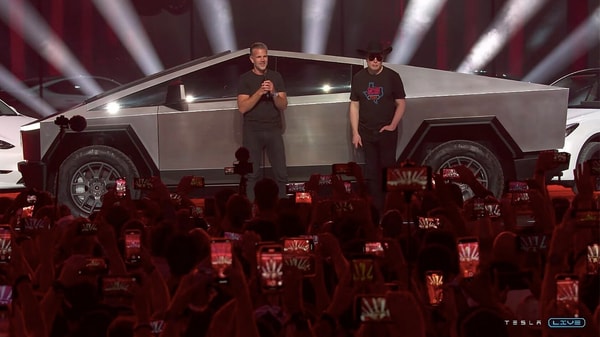 Tesla CEO Elon Musk officially inaugurated the US-based EV maker's latest Gigafactory in Austin, Texas early on Friday. Musk threw an elaborate party for more than 15,000 invited guest at an event called the Cyber Rodeo. This facility will be manufacturing the long-awaited Tesla Cybertruck, its first electric pickup truck which was unveiled back in 2019.

The Texas Gigafactory, which is spread over more than 8 square kilometres, is larger in its size compared to Pentagon. Tesla has been built the facility at a cost of $1 billion and received more than $60 million in tax breaks. This is Tesla's second manufacturing facility in United States besides its first at Fremont in California. Called Giga Texas, the facility will also produce other Tesla cars like the Model Y crossover. It will employ around 10,000 workers.

The “Cyber Rodeo" featured art installations including a Tesla coil, multiple stages and a sea of Texas-made Model Y sport utility vehicles, arranged to look like the Texas state flag. Tesla’s chief designer, Franz von Holzhausen, appeared on stage with Musk and the forthcoming Cybertruck, which will go into production next year.

Tesla's Cyber Rodeo event kicked off with hundreds of drones flying in formation aligning to form shapes like the Cybertruck. “Welcome to Cyber Rodeo. We’re going to talk about past, present and future," said Musk, who shared the stage with a Cybertruck. Elon Musk had invited several prominent guests at the event. Among them were actor Harrison Ford. The event was off-limits to the general public and the news media.

Musk said Tesla aims to increase its sales this year by scaling up production. He also promised that by next year, Tesla will bring new products, including the much-awaited Cybertruck, Semi and the next generation Roadster.

“It will be the highest volume car factory in the US," said Musk, adding that it could also become the world’s biggest battery cell factory. “We need a place where we can be really big, and there’s no place like Texas," Musk said.