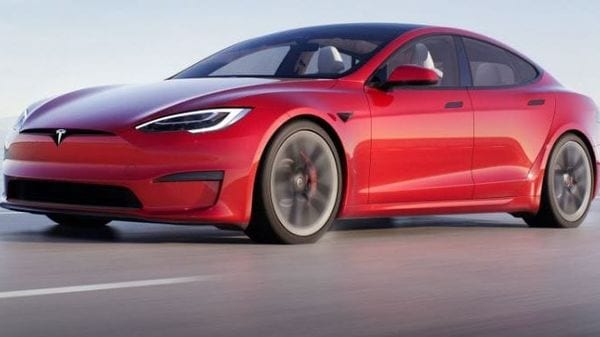 Tesla Model S Plaid claims to be the quickest EV in production.

Tesla has listed the official quarter-mile time as 9.23 seconds and the speed at 249.5 kmph. Tesla also claims the Model S Plaid as the quickest accelerating car in production currently.

However, $2.45 million costing Rimac Nevera electric car claims to have a 0-96 kmph sprint time of 1.85 seconds. This is quicker than Tesla Model S Plaid's claimed 1.99 seconds. But the Rimac model is a twin-seater hypercar and the Tesla Model S Plaid is a four-door sedan.

This car feels like a spaceship. Words cannot describe the limbic resonance.

Musk described the Model S Plaid as a spaceship. "This car feels like a spaceship. Words cannot describe the limbic resonance," he wrote on Twitter.

Tesla claims the 2021 Model S will come with the most comprehensive set of changes in nearly a decade. The Model S Plaid is the top-performance variant of the electric sedan. It gets an elevated level of dynamic performance with its triple motor setup.

The Tesla Model S Plaid replaces the Model S Performance. It is expected to have a top speed of 321.87 kmph and a running range of 627 km on a single charge.