Tesla Model 3 is the best-selling electric vehicle in the world with more than 439,0000 units sold last year.Tesla may launch Model 3, the most-affordable electric car in its lineup, as its first in India when the carmaker decides to start selling its vehicles in the country.
By : HT Auto Desk
| Updated on: 20 Aug 2021, 10:42 AM 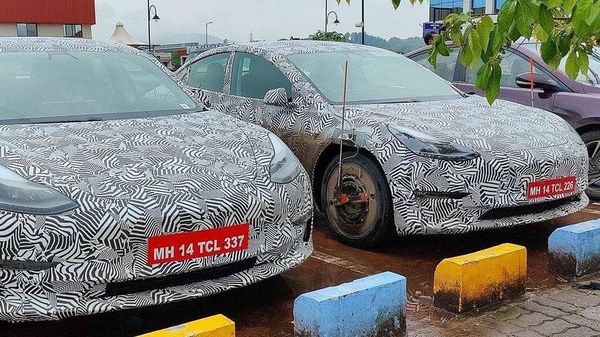 Tesla Model 3 launch in India may seem imminent as the US-based electric vehicle manufacturer has been seen testing the electric car a number of times on Indian roads in recent past. In the latest spy shots, at least two Tesla Model 3 cars were spotted in camouflage on the Mumbai-Pune Expressway this week with Maharashtra registration plates.

Tesla is yet to formally enter electric vehicle business in India, though it has registered itself as Tesla India Motors in Karnataka. It is reportedly in talks to setup an R&D center in Bengaluru. According to reports, Tesla may set up its first facility in India in either Kerala or Maharashtra.

Tesla's entry in India now hinges on the Centre's decision to the EV maker's demand to reduce import duties. Tesla CEO Elon Musk had recently expressed hopes that India reduces tax on imported electric cars to make its business viable. It triggered a debate among carmakers who appeared split in their opinions about reducing tax. Centre has asked Tesla to share its plan on local production before taking a call on reduction in import duties, but has not ruled out to do so yet.

Tesla is expected to import its cars to India via the completely built unit (CBU) route. Tesla Model 3 is likely to be priced from ₹55 lakh. Tesla Model 3 is the best-selling electric vehicle in the world with more than 439,0000 units sold last year.

337 seems to be new. Is Ground Clearance raised in it or just image thing?

Tesla Model 3 electric sedan comes with a 60kw hour lithium-ion battery pack. It has a top speed of 260 kmph, and can accelerate from zero to 100 kmph in a little over three seconds. The Model 3 also returns a range of around 500 kms on single charge. It comes in three different variants, the Standard Range or the Standard Range plus (RWD – Rear Wheel Drive), the Long Range and the Long-Range performance (AWD – All Wheel Drive.)