'No time to eat': Tesla Model 3 flying off shelves in China after price cut

Tesla Model 3 has managed to emerge as the dominant player in the Chinese EV market.A recent price cut has seen demand for Model 3 Standard Range go up significantly.Showroom representatives say they don't even have time to eat with potential customers coming in in a steady stream.
By : HT Auto Desk
| Updated on: 02 Oct 2020, 08:48 AM 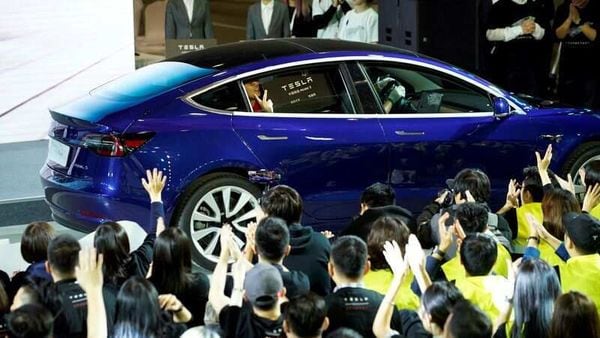 File photo - A Tesla China-made Model 3 vehicle owner sits inside a car during a delivery event at Tesla's Shanghai factory.

Tesla Model 3 electric car is continuing to rule sales chart in China, the world's largest market for electric vehicles, and a recent price cut has made the vehicle even more popular than it has been since local manufacturing first began late 2019. According to reports, Tesla stores in the country are reporting a sharp uptick in demand and orders for what is currently the most affordable offering from the American EV maker.

According to a report in Teslarati quoting a Tesla representative, Model 3 has seen a sudden but sure-footed spike in demand due to price adjustments made recently. The car - Model 3 Standard Range - now starts at CN 249,900 ($36,800 or ₹26.95 lakh) and is therefore, cheaper than the same car made in the US market for American customers. Reports also suggest that such has been the magnitude of demand for Model 3 now that showrooms are struggling to keep up with the constant flow of prospective customers. Some say representatives here don't even have time to eat as they are too busy

China has extended its subsidy policy for EVs but only up to a certain price bracket. This resulted in Tesla slashing the price of its Model 3 to help it fall in the bracket that is valid for subsidies. Many feel that it has been like a masterstroke to ensure that potential buyers do not head over to rivals for the want of such subsidies.

And while Model 3 Standard Range is getting maximum attention, Model 3 Long Range RWD too received a price cut and has also been getting traction in the Chinese EV market.

In a country where local players are almost as dominant as international car makers, Tesla's rise has been meteoric and to a degree that has made the Chinese market extremely crucial for the global prospects of the California-based company.