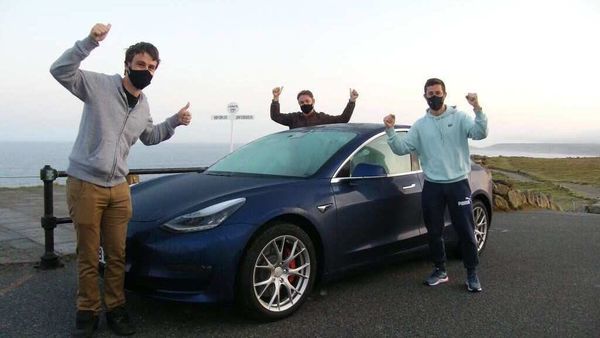 Tesla has entered the Guinness Book of Records thanks to its popular Model 3 sedan. During a sponsored run by Zero Carbon World charity, a Tesla Model 3 recorded the fastest charging time for an electric vehicle.

Formula E racing driver from Mahindra Racing team Alexander Sims, along with Zero Carbon World’s Dean Fielding and EV specialist David Peilow recently took the Tesla Model 3 out on a run in UK to demonstrate improvements in EV charging infrastructure. They targeted to improve the previous record of 3 hours 44 minutes and 33 seconds taken by the previous record-holder in 2015.

Sims and his partners managed to completely thrash the record by spending a little over half an hour charging the vehicle while driving across the country. They trio stopped for just one hour 31 minutes and 32 seconds to replenish the Tesla Model 3 during the record-breaking run. They used a 150kW Tesla Supercharger station and three 350kW Ionity chargers during the 855-mile journey.

Zero Carbon trustee Dean Fielding said, “Electric vehicles, charging capabilities and the charging infrastructure have come on in leaps and bounds over the past decade, and we want to bring attention to the fact that the UK is increasingly becoming EV-friendly and that making the switch to an EV is feasible, practical and enjoyable for both long and short journeys."

Range and charging time are two of the biggest deal-breakers for people who want to buy electric vehicles around the world. Constantly improving technology, bigger and more powerful batteries and fast charging stations are increasingly reducing the anxieties among prospective buyers.

Yet, time taken to fully charge an electric vehicle through regular charging station still takes hours. However, things seem to have certainly improved in UK, where the government has upgraded the EV charging infrastructure.