A recent spike in Covid-19 cases in China's financial hub Shanghai has caused a major disruption in car production as well. This is the first time that Tesla has hit production snag in the country.
By : HT Auto Desk
| Updated on: 15 Apr 2022, 09:37 AM 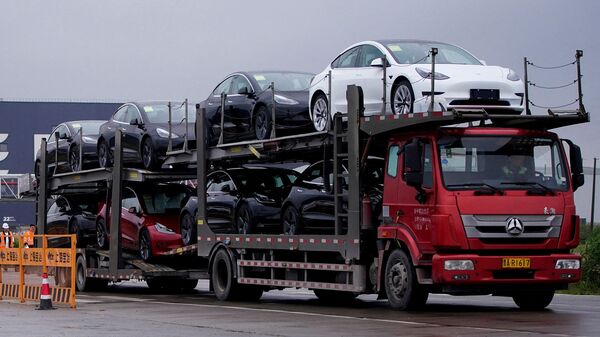 File photo: A truck transports new Tesla cars at its factory in Shanghai.

Tesla could face loss of around 40,000 electric cars due to the ongoing lockdown in Shanghai, China. The US-based electric carmaker’s Shanghai Gigafactory, its first outside home base, has been forced to suspend operations for three weeks. Tesla usually manufactures around 2,000 cars from this facility every day. A three-week suspension would mean loss of about 39,900 units in all.

The production at Tesla's Shanghai facility has been shut since March 28. This is the first time that Tesla has hit a major production snag in China since its started manufacturing its electric cars in the country in 2019. A recent spike in Covid-19 cases in China's financial hub has forced a lockdown and caused major disruption.

Situation could worsen if China continues with lockdowns till the end of the month. It could carry on even in May depending on the situation. Premier Li Keqiang referred to carmakers on Thursday in a post which read, “If supply chain companies could not find a way to resume operation and production, it’s likely all Chinese OEMs may have to suspend production in May."

Further lockdown will only impact Tesla's aim to reach new highs this year. Tesla CEO Elon Musk, during the inauguration of its new facility in Austin, Texas, said that Tesla would aim to break its own record this year. However, if shutdown in China persists, Tesla could lose well over 100,000 units, which is one-third of its global sales in the first three months of this year. Tesla made 305,000 vehicles in the fourth quarter globally. The EV maker's Giga Shanghai manufactures two of its flagship EVs Model 3 and Model Y for both China and export to other countries.

In the first three months of this year, Tesla produced 182,174 vehicles from the Shanghai factory. The recent shutdown is the longest Tesla has witnessed in China since it started manufacturing in the country. It is worse than when Covid-19 first hit two years ago or the chip crisis that forced suspensions in the past.

Tesla's Shanghai facility factory usually runs for six or seven days a week over three shifts, depending on maintenance arrangements. And ramping production back up from a shutdown isn’t an instant process.