The US carmaker aims to lower costs by using more local components, allowing it to import fewer parts and avoid tariffs.
By : Bloomberg
| Updated on: 18 Dec 2019, 13:15 PM 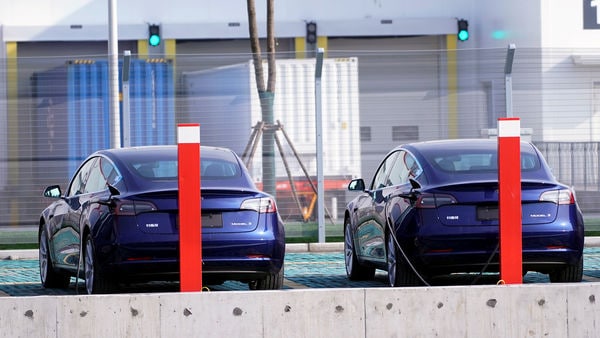 Tesla Inc. is considering cutting the price of its China-built Model 3 sedans by 20% or more next year, people familiar with the plans said, betting the move will lure buyers as the world’s biggest electric-vehicle market slows.

Tesla aims to bring down costs by using more local components, allowing it to import fewer parts and avoid tariffs, the people said, asking not to be identified as the matter isn’t public. Prices of the cars, which will be built in Tesla’s new Shanghai factory and start at 355,800 yuan ($50,800), will probably be lowered from the second half of 2020, they said.

Chief Executive Officer Elon Musk is counting on the multibillion-dollar Shanghai plant, Tesla’s first factory outside the U.S., to give it an edge over the likes of BMW AG and Daimler AG, which are also targeting China with new EV models. The move would also pressure local incumbents such as NIO Inc. and Xpeng Motors to follow suit with price cuts.

Competition is heating up as EV makers struggle through an unprecedented slump. Sales of electric cars have fallen for months in China after the government scaled back subsidies.

While the potential price cut shows Tesla is cognizant of the competition, the move could also impact the company’s initial sales as customers hold out for the lower prices, Russo said. Musk has predicted Tesla will make at least 1,000 cars a week in Shanghai by the end of the year — a volume the company’s original factory in California spent months trying to hit — and has said a weekly rate of 3,000 is a target at some point.

Shares of Tesla’s suppliers rose on expectations of increasing sales. Ningbo Tuopu Group Co., which makes suspension and vibration-control mechanisms, jumped as much as 4.4%, while parts manufacturer Ningbo Xusheng Auto Technology Co. advanced as much as 9.2%.

The scale of the price cuts and the timing could change depending on market situations, the people said. A Tesla representative in China declined to comment.

Much of the cost cuts will hinge on batteries, which are typically the most expensive part of an electric car. Tesla currently relies entirely on Japan’s Panasonic Corp. for batteries but that’s changing as it agreed to buy batteries from an LG Chem Ltd. factory that’s about 200 miles (320 kilometers) northwest of Shanghai, people familiar said in August. Tesla also struck a pact to use batteries from China’s Contemporary Amperex Technology Co. Ltd. by as early as next year, people familiar said last month.

Meanwhile, Tesla has been making final preparations to begin deliveries from its Shanghai plant. This month, Chinese authorities disclosed that the locally built Model 3 will qualify for state subsidies of as high as 24,750 yuan per car, though it’s unclear how much of that rebate would go directly to customers.