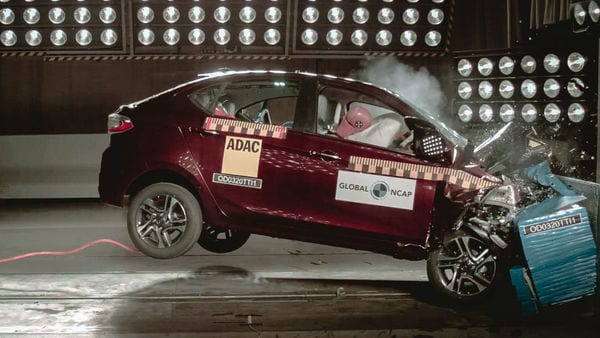 After Tata Altroz and Nexon passed the Global NCAP crash test with 5-star ratings, the Tata Tigor and Tiago too have cleared the global safety test.

The Tigor and Tiago offers 2 frontal airbags as standard. Its structure and its footwell area were rated as unstable. Head and neck protection for adult occupants was good. Chest protection for passenger was adequate and marginal for the driver. Femur and knees showed marginal protection as there is risk of contracting dangerous structures behind the fascia.

The child seat for the 3 year old was installed FWF with the adult seatbelt and support leg and was able to prevent excessive forward movement during the impact, protecting the head and offering fair protection to the chest. The 18 month old CRS was installed using the adult belt and support leg rearward facing and the protection offered to the 1.5 years old dummy was good.

The Tigor and Tiago do not offer three point belt in all seating positions and does not offer ISOFIX anchorages. The car does not offer the possibility of disconnecting the passenger airbag in case a rearward facing CRS needs to be installed in the front passenger seat.

Tata Motors has launched the BS 6 version of both Tiago and Tigor at an event in Mumbai today. The new Tata Tigor will got a facelift with new bumper with a wider grille and LED DRLs. It also got updated with a new steering wheel and touchscreen infotainment system.

Both the Tiago and Tigor will come in five variants in both petrol and diesel options. Both cars are offered with 1.2-litre, three-cylinder petrol engines. While the Tiago is priced at ₹4.6 lakh, Tigor will cost ₹5.75 lakh.