Tata Safari packs in three-rows and a set of new features to promise a premium ride and drive experience.Safari has similarities with Harrier - same engine and transmission options, for example. But it does also seek to carve out its own unique identity.
By : HT Auto Desk
| Updated on: 22 Feb 2021, 10:33 AM 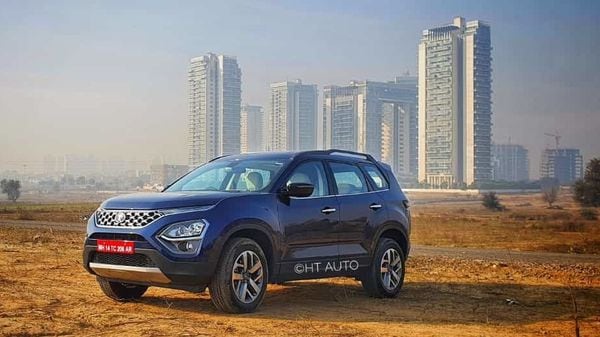 From concept to pre-production model, the Tata Safari has maintained the same bold and sophisticated look. (Image: HT Auto/Sabyasachi Dasgupta)

Tata Safari will be launched in India today and all eyes would be on how Tata Motors prices the vehicle that is promising to create quite a lot of stir in the three-row SUV segment. Bookings for Safari has already been underway for an amount of ₹30,000 and it comes in four variants - XE, XM, XT and XZ.

Safari makes a whole lot of promise and is looking at building on the success of the Harrier SUV. The vehicle, essentially, is a three-row version of Harrier and can be had in either six or seven-seat configurations. While the seven-seat option is available across variants, the six-seat layout is reserved for the XZ+ and XZA+ variants.

An extended rear overhang is how Safari is able to offer more cabin space even though the wheelbase of the car remains the same as that of Harrier. In fact, even the dash layout is similar and the vehicle gets an 8.8-inch infotainment screen, semi-digital TFT screen, among other highlights. There is a massive panoramic sunroof, iRA connectivity suite and electric parking brake which add to the feature list.

Powering the Safari is the familiar 2.0-litre turbocharged diesel engine which produces 170 PS and has 350 Nm of peak torque. Transmission duties too are handled by the same six-speed manual and automatic units.

Looking at rivaling the likes of MG Hector Plus, Mahindra XUV500 and the upcoming Hyundai Creta seven-seater, much of the success of Harrier is likely to also depend on its price structure. Expect Safari 2021 to be priced between ₹15.50 lakh and ₹21 lakh (ex showroom).