The Gravitas SUV will appeal to buyers seeking a three-row SUV. Tata Motors will likely announce the pricing of the Gravitas SUV in the first quarter of 2021. Tata Gravitas will be a rival to the likes of Hector Plus.
By : HT Auto Desk
| Updated on: 21 Dec 2020, 02:46 PM 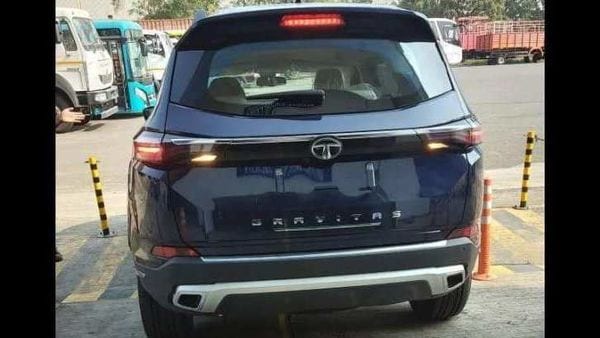 Tata Gravitas SUV is expected to go on sale in India in first-quarter of 2021. Image Credits: Team-BHP

Tata Motors is gearing up to launch a longer (seven-seat) version of its popular Harrier SUV in the Indian market in the form of Gravitas. The company has already showcased the near-production version of the same at the Auto Expo 2020 and is planning to go ahead with the launch in early 2021. The SUV has now been spotted in a completely undisguised form undergoing testing on the Indian roads. The leaked image delineates closer details on the rear-end of the SUV.

Goes without saying, the final production-spec version will be largely based on the six-seat model displayed in the past. While the model is derived from Harrier there are some striking differences at the rear fascia including a new bumper, different reflectors and silver inserts with a blacked-out plastic panel stretching across the bumper. The model also boasts proper dual exhaust tips on either side to make the rear end look sporty. Also, clearly visible the back window has been kept upright to make space for the last row occupants, unlike Harrier which features a fairly rakish glass.

Both the SUVs appear to be similar from the front end, but the profile is quite different due to a longer rear overhang on the Gravitas, though the wheelbase has been likely kept the same. Also, the roofline has been kept fairly straight on the Gravitas in order to carve out headroom for the last row passengers.

Inside, Gravitas will benefit from a long list of features sourced from its donor model. Expect the seven-seat SUV to get a signature-style oak brown dual-tone dashboard with an 8.8-inch floating infotainment system, JBL speakers, a 7-inch instrument panel, panoramic sunroof, and more such features.

In terms of mechanicals, it will source power from a 2.0-litre, 4-cylinder diesel engine which is known to deliver 168 bhp and 350 Nm of peak torque. The transmission options will include a 6-speed manual or a 6-speed torque converter automatic gearbox.