The sportier version of the Harrier features new accessories that have been cataloged under GR parts in the Toyota’s TRD division.
By : HT Auto Desk
| Updated on: 24 Jun 2020, 03:34 PM 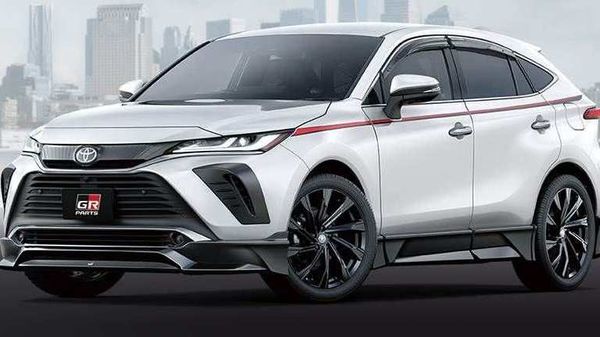 Toyota Harrier looks sportier thanks to the GR accessory kit.

After the launch in the Japanese market a few days back, Toyota has now rolled out a sportier version of the Harrier (not to be confused with Tata Harrier). The SUV features new parts and accessories that have been cataloged under GR parts in the Toyota’s TRD division. Apart from the styling additions, there are new functional add-ons as well.

On the outside, the GR accessorised Harrier features a sportier, fully blacked-out front spoiler, side skirts, a rear diffuser, as well as a quad-piped stainless steel exhaust system. Moreover, other additions include black-finished 20-inch alloys, a black/red stripe along the beltline, and a spoiler element which sits atop the tail-lamps. That said, the kit also includes some more generic accessories including sun film for the windows, floor mat for the boot, a sunshade, and more. The GR accessorised Harrier features a sportier, fully blacked-out front spoiler, side skirts and a rear diffuser, as well as a quad-piped stainless steel exhaust system.

There are no performance-specific additions on the kit, save for the performance dampers which are claimed to improve the overall ride and handling manners of Harrier, especially on high speeds.

The new Harrier is based on the TNGA (GA-K) platform. The suspension system includes MacPherson struts at the front and a double wishbone system at the rear.

There are no confirmed plans if the original Harrier will arrive in India anytime soon. But, Toyota India has a number of new and major products in the pipeline starting from the rebaged version of the Vitara Brezza which will most likely be launched in the festive season. Apart from that, a new facelifted Fortuner has also been revealed in Thailand recently, though unconfirmed, expect the same to arrive sometime in 2021.