Skoda shares glimpse of 2022 Enyaq iV ahead of launch

The new generation Skoda Enyaq electric SUV is all set to break cover globally on January 31. The Czech carmaker has also said that the Enyaq electric SUV will be brought to India next year.
By : HT Auto Desk
| Updated on: 11 Jan 2022, 01:01 PM 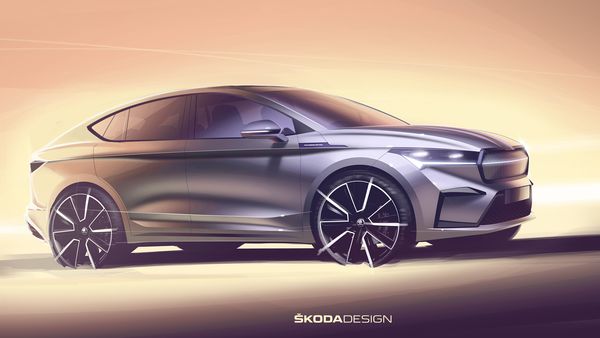 Skoda shared a sketch of the 2022 Enyaq electric SUV ahead of launch on January 31.

Skoda is all set to unveil the Enyaq iV electric SUV on January 31. Ahead of the global debut, Skoda has shared a glimpse of the Enyaq iV through sketches of the exterior.

The sketches show how the Enyaq iV electric SUV's design is a lot inspired from the Volkswagen ID.5. The aggressive front face coupled with a sloping roofline and large wheel arches give the Enyaq iV a bold road presence. The side skirts painted in the body colour. The design at the rear is dominated by Skoda's signature C-shaped rear lights and the brand's lettering in block capitals.

The 2022 Skoda Enyaq iV is based on the Volkswagen Group’s Modular Electrification Toolkit (MEB) platform. Skoda says the emotive design of the Enyaq iV Coupe and its aerodynamics will help it offer greater range than the SUV version. Skoda claims he upcoming Enyaq Coupe iV electric SUV will offer the best drag coefficient in its class to make it more efficient aerodynamically. The company shared that the drag coefficient of the electric vehicle is all ready to set a benchmark in its segment.

Depending on the configuration, the total power of the Skoda Enyaq iV ranges from 148 hp to 306 hp. The top version of the line has a maximum speed of 180 kmph and has the ability to touch 100 kmph from zero in 6.2 seconds.

The Enyaq is the first all-electric offering from the Czech manufacturer. The name itself is derived from the Irish name ‘enya’, meaning ‘source of life’. Skoda Auto India recently confirmed that it plans to test the electric vehicle market in India with Enyaq EV as a premium offering. The carmaker has said that the Enyaq will arrive in India in 2023 as Fully Built Unit (FBU).