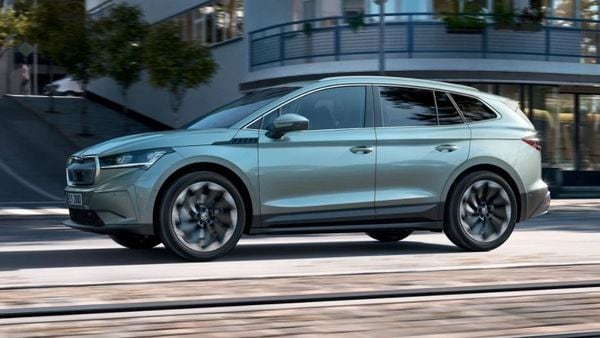 Skoda Enyaq will enter India as a Fully Built Unit. This means it will be a pricey proposition.

Skoda Auto India is currently busy with the launch plans of Kodiaq SUV - scheduled for January 10 - and Slavia premium mid-size SUV  by February end. But while Skoda is looking at building on its Kushaq-powered success in 2021, it has its sights also firmly set on the electric mobility space in the country and has revealed that the Enyaq will arrive here in 2023 as Fully Built Unit (FBU).

(Check out this report in photostory)

In an interaction with members of the press on Thursday, Zac Hollis, Brand Director at Skoda Auto India, underlined that while mass-market electric vehicles aren't likely for India till at least 2025, the Enyaq EV will help the company assess the market for potential subsequent launches. “We will bring in Enyaq to India next year but it will be a premium offering due to the FBU taxes. (But) It will enable us to test the market," he said, adding that factors such as infrastructure development and cost-effectiveness of batteries are crucial in helping EVs and that volume is crucial in the case of mass-market battery-powered options.

In September of last year, Hollis, in a tweet reply, had said the Enyaq is still being assessed for India.

The Enyaq is the first all-electric offering from the Czech manufacturer. The name itself is derived from the Irish name ‘enya’, meaning ‘source of life’. (Read more here)

The all-electric SUV has a sporty road presence and was unveiled to the world in early September of last year. Built on the Volkswagen Group's MEB modular platform , it is powered by multiple battery options. The 55kWh battery provides 340km of driving range while one can drive 390 kms courtesy a 62kWh battery. There is also an 82kWh battery that provides 510km of driving range.

In select global markets where Skoda Enyaq has already been launched, it is available in five versions: three rear-wheel drive and two four-wheel drive.

The design highlight of the EV seeks to attach importance to space for passengers on the inside. There is an LED-backlit grille, sculptural lines, with a short front and large wheels.