Home Auto Cars News Skoda Kushaq Suv Off To Solid Start With Over 2,000 Bookings In A Week

Skoda Kushaq SUV off to solid start with over 2,000 bookings in a week 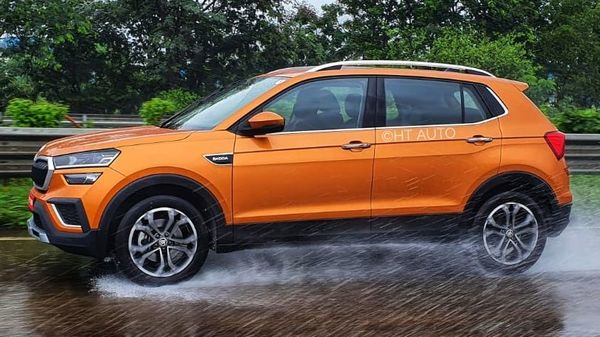 Skoda Kushaq isn't the tallest or widest in its segment but has a generous wheelbase.

Skoda Kushaq was launched in the Indian car market last week and it would appear that the mid-size SUV - rival to the Hyundai Creta, Kia Seltos and Tata Harrier - has had a brisk start courtesy more than 2,000 bookings received in a week's time.

Kushaq is offered with a 1.0-litre TSI engine which comes with both a 6-speed manual as well as an automatic transmission. There is a more powerful 1.5-litre TSI four-cylinder turbocharged petrol engine expected this month as well. While the former starts at ₹10.50 lakh, the top-end variant with 1.5-litre engine and 7-speed DST automatic transmission has been priced at ₹17.60 lakh (ex showroom).

Based on the highly versatile MQB-A0-IN vehicle architecture, Skoda Kushaq has been primarily designed and developed for the Indian car market. The Czechs are attempting to have a bigger say in the automotive sector in the country and the lucrative mid-size SUV segment was a natural choice even if the space is fiercely fought for.

Offered in five colour options - Torando Red Metallic, Candy White, Brilliant Silver, Carbon Steel Metallic and Honey Orange Metallic, Kushaq also ticks most of the boxes when it comes to features - a key component when taking on the might of Korean rivals. And with concerns over sales and service network being addressed through assurances of major ramp up, the Kushaq may be on a solid footing.

The road ahead, however, may present more challenges as while Kushaq is the newest kid on the block, Volkswagen is readying its Taigun SUV to enter the space. For prospective buyers interested in a mid-size SUV, however, the problem of plenty may not be a problem at all.