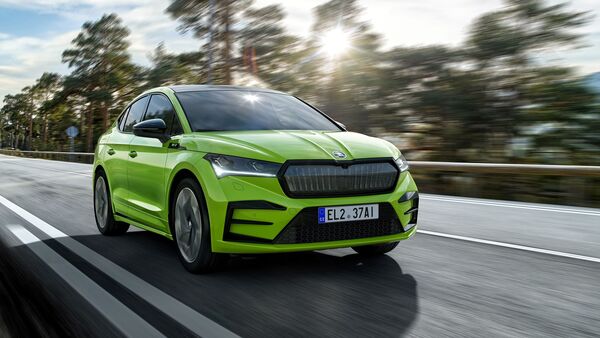 Skoda has unveiled the new Enyaq Coupe iV fully electric SUV. The five-seater EV has made its debut along with its RS sports variant, which is the first fully electric Racing Sport model from the Czech carmaker. Both electric cars are based on the same MEB modular platform that underpins the preceding model Enyaq iV.

The RS version, besides having a lower ground clearance, gets its grille, window trims and rear diffuser finished in black. It also has 20-inch black Taurus alloy wheels, with the option of a 21-inch as well. There is also RS emblems and darkened rear windows to separate its styling from the standard versions.

Thomas Schafer, CEO at Skoda, said, “Following the successful launch of the SUV, the new Enyaq Coupe iV brings even more emotiveness, sports styling and elegance to the Skoda iV family. Our designers and engineers have once again succeeded in combining a high degree of functionality with an emotive design. The brand-new range-topping model is also the first-ever all-electric Skoda RS. The Enyaq Coupe iV perfectly combines emotion with efficiency, offering the Skoda-typical generous amounts of space, even in a particularly elegant body."

The most powerful version is the RS iV, which can generate maximum output of of 295 hp and 460 Nm of torque, matching that of the Volkswagen flagship EV ID.5 GTX, thanks to two motors and all-wheel drive. It is capable of hitting 100 kmph from standstill in just 6.5 seconds and has a top speed of 180 kmph.

The rear-wheel drive Enyaq Coupe with an 82 kWh battery has a range of up to 545 kms according to the WLTP cycle, compared to the 531 kms approved under the same cycle by the Enyaq iV 80.