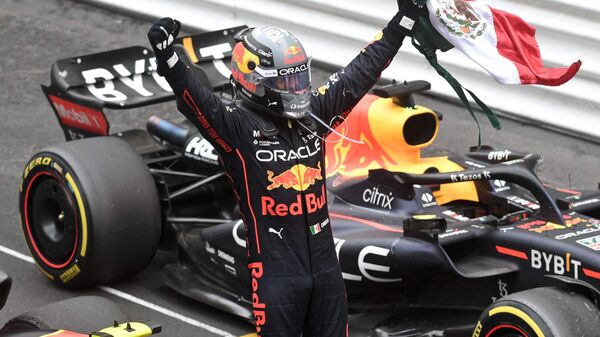 Sergio Perez earned his third career Formula One victory at the Monaco Grand Prix on Sunday after Ferrari's questionable strategy cost Pole-sitter Charles Leclerc the win on his home circuit. After winning the race at Monaco GP, the Mexican F1 driver said that after the home race, there was no place more special to win. “You dream of winning this, and after your home race, there is no place more special to win," Perez said.

The race at Monaco GP was delayed by 70 minutes due to heavy rain and began from a rolling start behind a safety car. The race was then red-flagged on Lap 30 after Mick Schumacher’s heavy crash sliced his Haas racecar in two. However, he escaped unharmed. Commenting on the incident, Schumacher expressed his disappointment for not being able to finish the race. “I don’t know why the car split in two," he said.

For Charles Leclerc, it was a frustrating race as well at his home turf. He led the race from the pole and screamed in rage when asked to pit for a second tyre change on Lap 22. When his engineer realized the mistake and yelled to stay out, it was too late. Leclerc came back on the track in fourth place. He vented his frustration after the race, by saying “No words, no words. We cannot do that." Leclerc won the pole a year ago but never got to start because he crashed at the end of qualifying, and the racecar’s gearbox failed moments before the start. Back in 2018 and 2019 as well, he had to retire from the race with crash damage. Hence, this time, it was clearly very frustrating for him.